The first women’s rights convention was held at Seneca Falls, New York in 1848. A Declaration of Sentiments was drafted, outlining the agenda for the women’s rights movement, and a set of twelve resolutions was adopted, calling for equal treatment under the law and voting rights. Although no one from Cornwall attended, news about the convention was widely published. Cornwall’s women would certainly have been aware of the convention, heralded as the first ever called to discuss the civil and political rights of women.

The activities of the movement were suspended during the Civil War, when women’s rights advocates agreed that abolitionism and the war effort were higher priorities. Many female women’s rights advocates were also active abolitionists. Following the war, in 1869, the National Woman Suffrage Association was formed, with the primary goal of achieving voting rights for women. 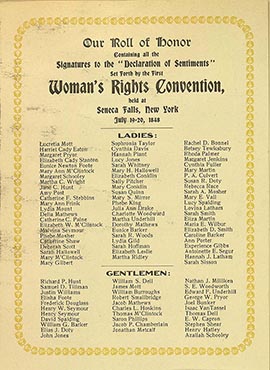 Signers of the Declaration of Sentiments set forth by the first Women’s Rights Convention, held at Seneca Falls, NY in 1848.
(Collection of the Library of Congress, Rare Book and Special Collections Division) 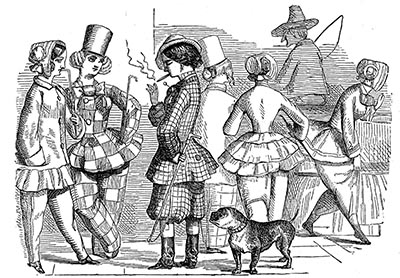 The “bloomer costume,” named for its main proponent, Amelia Bloomer, was introduced in 1848. Women’s rights advocates embraced the outfit as a liberating design. For others, however, the bloomer costume was shocking. For some, the skirt was scandalously short; for others, the ensemble bore too close a resemblance to men’s clothing.

In 1851, two young women in Torrington made the news by wearing “full Bloomer costume” to church. The Litchfield Republican newspaper reported (July 24, 1851) that their outfits were condemned as “ridiculous” by some, while others declared “that aside from their oddity, there was nothing ridiculous about them.”

No records of the Bloomer outfit being worn in Cornwall have yet been found.

The sewing machine was praised as a liberating device for women, freeing up their time for intellectual pursuits. Many supporters of women’s liberation, however, were quick to assure the public that no one expected emancipated women to abandon their domestic duties.

The dismayed woman of the house saw her three days’ prepared work melting away before noon, as a three days’ April snow disappears in a few hours!

~ Henry Ward Beecher, “Our First Experience with a Sewing-Machine,”
in The Independent, December 16, 1858

What the telegraph is to the commercial world, and the reaper to the agricultural, the sewing machine is to the domestic. No one invention has brought with it so great a relief for our mothers, wives and daughters as these iron needle women. Indeed, it is the only invention that can be claimed chiefly for woman’s benefit.

This marketing ploy, pairing women’s happiness with domestic appliances, remained in use for over a century. 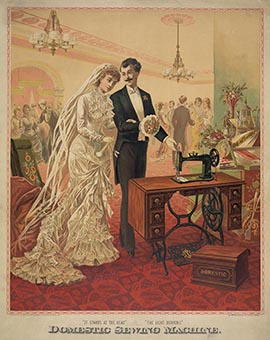