The women’s rights movement gained new energy following the Civil War. Women such as Susan B. Anthony and Elizabeth Cady Stanton dedicated their lives to greater equality for women. While gaining the right to vote was one of their best-known goals, the women’s rights activists of the late nineteenth century sought to free women from all of the gender-based restraints placed upon them by society.

In Connecticut, the Married Women’s Act of 1877 established separate legal identities for married women, ending centuries of tradition merging women’s legal status with that of their husbands. Married women were finally entitled to full control of their finances and property, to sue and be sued, and to enter into legal contracts without the husband’s involvement.

Clipping from the Catlin Scrapbook
(Collection of Cornwall Historical Society)

Cornwall women, while not on the national stage, followed the women’s rights movement carefully. School teacher Emma Catlin and her mother, Sarah Hotchkiss Catlin, lived on the family farm in Cornwall and kept a scrapbook which included newspaper clippings with portraits and information about prominent women, including Susan Madora Salter, the “First Woman Mayor,” and Lucy S. Barber, “The Woman Who Voted.” 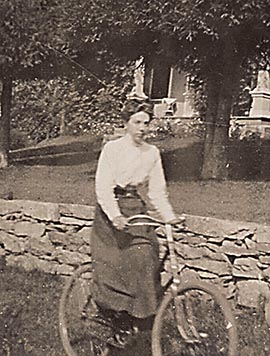 Cornwall’s Jessie Rogers, who worked as a teacher until her marriage, awkwardly riding a bicycle with a long skirt.
(Collection of Cornwall Historical Society)

The introduction of the bicycle played an important role in women’s liberation during the late nineteenth century. Becoming widely popular during the 1880s, the bicycle gave women a sense of freedom they had never had before. Women cyclists proved to themselves and to others that women were not frail, timid creatures wholly dependent on men to help them. They demonstrated their physical strength, competence, and independence.

While more daring women wore practical bloomers or even bicycle suits with pants that wrapped tightly around the ankles while riding, many women adhered to societal convention and wore long skirts, which had a tendency to get tangled in the chain and wheels.

Let me tell you what I think of bicycling. I think it has done more to emancipate women than anything else in the world. It gives women a feeling of freedom and self-reliance. I stand and rejoice every time I see a woman ride by on a wheel…the picture of free, untrammeled womanhood.

The concept of women riding bicycles and demanding greater equality with men was met with strong resistance. A stereopticon image from 1901 captioned “The New Woman — Wash Day,” caricaturized a common fear that the women’s rights movement would ultimately make men subservient to women. The woman was depicted as confident and strong, smoking a cigarette and wearing an outfit designed for riding the bicycle seen behind her. The man, wringing out the laundry, bowed down, in a submissive pose, to reach the wash bucket, wears a skirt. 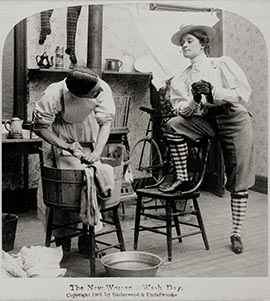