Just as women were not allowed to vote until 1920, they were discouraged from running for public office. During the late 1800s, a few women throughout the nation ran for office, some successfully. After women gained the right to vote, an increasing number of them became active in politics.

Cornwall elected its first female Town Clerk, Mary E. Wilcox, in 1927. A year later, May Wilford became the first Cornwall women to serve in the State House of Representatives. She was followed by Harriet Clark, who served in the State Legislature from 1956 until 1965. 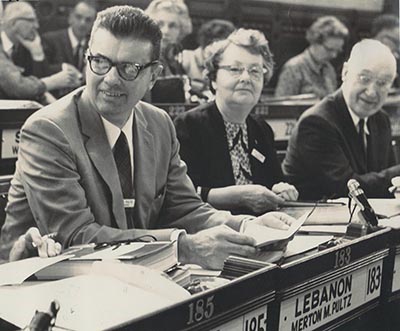 Harriet Clark at her seat in the State Legislature, April 1961.
(Collection of Cornwall Historical Society)

Each lawmaker earned $300 per year, compared with $7,500 and $4,500 yearly salaries for neighboring New York and Massachusetts legislators. Low pay was one reason why so many Connecticut women were able to serve in the state capitol. “The men–the young lawyers, the accountants, could make better money doing other things,” Miss Clark said.

~ Excerpt from an interview with Harriet Clark in the Litchfield County Times, November 19, 1982. 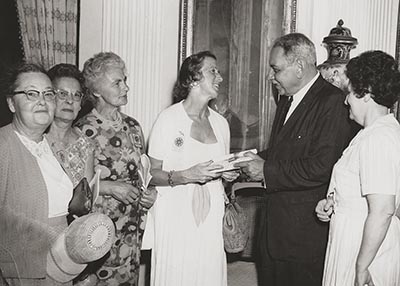 Throughout the twentieth century, the political arena in the U.S. was dominated by men. During the 1920s and ’30s, the few women politicians banded together to support one another. The Order of Women Legislators (OWL) was started in Connecticut in 1927, growing into a national organization in 1938. When the OWL was founded, there was only one toilet for women legislators at the Hartford capitol building, tucked away in an unfinished area of the third floor. By the 1950s, the women legislators shared a small office, lounge, and coat room on the fourth floor of the capitol building.

OWL Constitution, Article II: The objects of the Order shall be to kindle and promote a spirit of helpfulness among present and former women legislators; to encourage greater participation of competent women in public affairs; to encourage election of appointment of increasing numbers of competent women to public office; to promote interstate relations of friendship, and to act as a clearing house for information for the members of the Order.