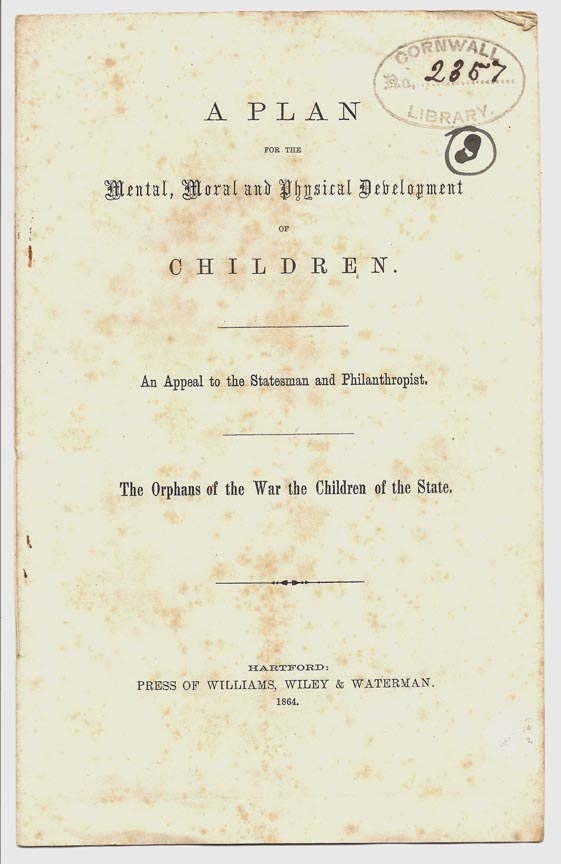 Theodore S. Gold, “A Plan for the Mental, Moral and Physical Development of Children. The Orphans of the War the Children of the State,” 1864.
(Collection of Cornwall Historical Society)

Approximately 5,354 men from Connecticut were killed during the Civil War. They left behind widows and children—so many children that Theodore S. Gold of West Cornwall put forth a proposal for the state to care for them. As a result, the General Assembly charted the Connecticut Soldiers’ Orphans’ Home in May 1864; it opened two years later in Mansfield. Gold served as Secretary of the home during its nine years of operation. More than two hundred Civil War orphans were given a home and education.

The orphanage operated on a fifty-acre farm, with a new building originally intended to become a school for boys. In 1881, the orphanage reopened as the Storrs Agricultural School (now the University of Connecticut). Theodore S. Gold was a trustee of the school for twenty years.

Theodore Gold originally planned to open the orphanage in Cornwall – if this plan had gone through, Cornwall might very well have become the home of the University of Connecticut.