The Death of Sedgwick 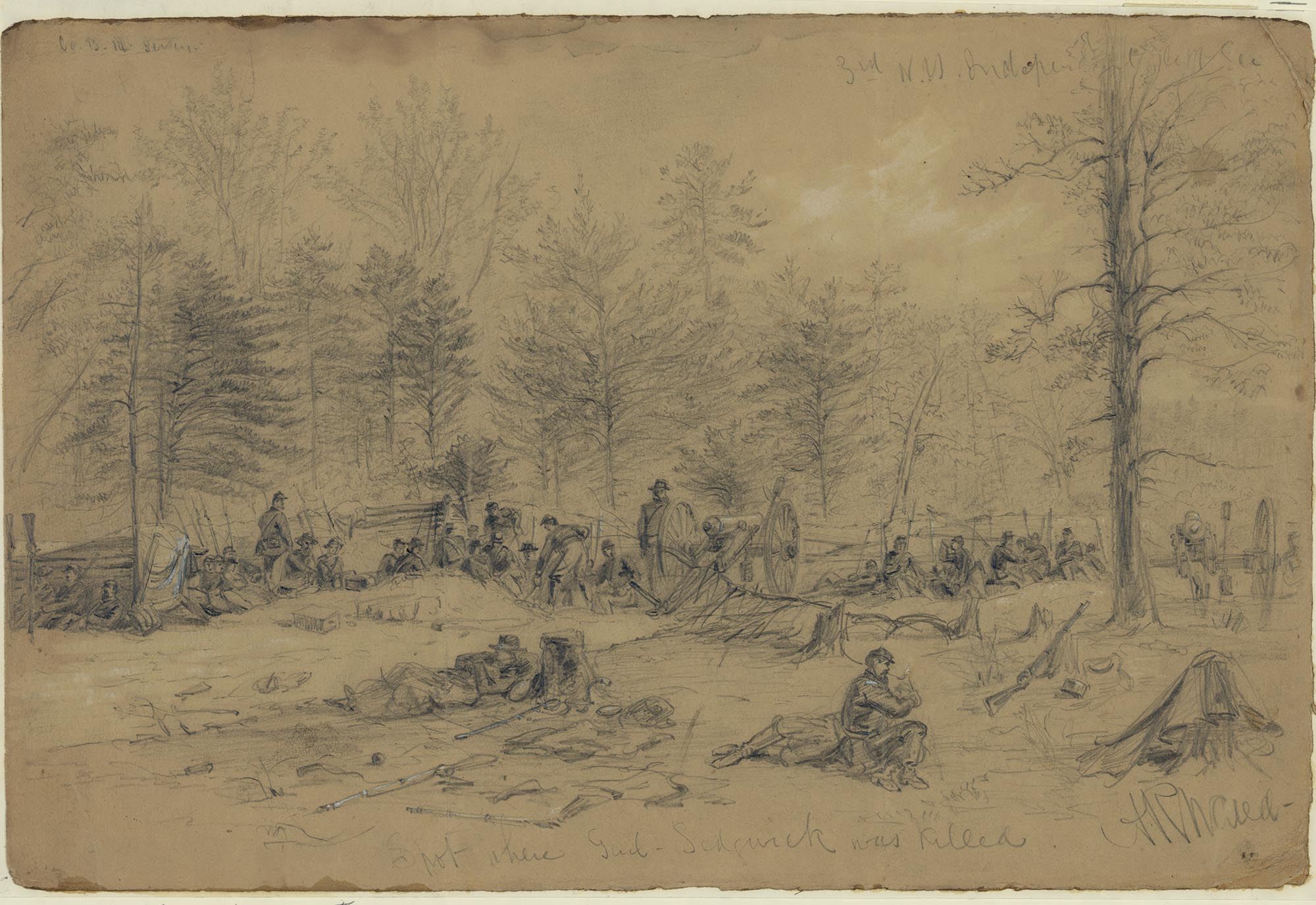 “Spot where Gen’l Sedgwick was killed,” sketch by Alfred R. Waud, 1864.
(Courtesy of Library of Congress, Prints and Photographs Division)

Major General John Sedgwick was killed by a single bullet to the head on May 9, 1864. At the time of his death, he was overseeing preparations for the Battle of Spotsylvania Courthouse. Confederate sharp-shooters were firing occasional bullets at the Union troops, causing some of them to duck for cover. Sedgwick refused to be concerned, and was struck by a bullet just below his left eye, dying instantly.

Sedgwick was the highest ranking Union officer to be killed during the war. He was loved by all that knew him, and his death came as a shock. Sedgwick was buried at Cornwall Hollow.

The circumstances of Sedgwick’s death have remained legendary. In most versions of the story, Sedgwick is said to have proclaimed “they couldn’t hit an elephant at this distance” immediately before being killed by a bullet. The most truthful version of the story is the one told in decades later by Martin T. McMahon, who was standing next to Sedgwick when he was killed. McMahon recounted the sad tale at the 1887 dedication of the Sedgwick Memorial at Spotsylvania Courthouse, as follows:

…the enemy opened a sprinkling fire, partly from sharp-shooters. As the bullets whistled by, some of the men dodged. The General said, laughingly, “What! what! men, dodging this way for single bullets! what will you do when they open fire along the whole line? I am ashamed of you. They couldn’t hit an elephant at this distance.” A few seconds after, a man who had been separated from his regiment passed directly in front of the General, and at the same moment a sharpshooter’s bullet passed with a long shrill whistle very close, and the soldier, who was then just in front of the General, dodged to the ground. The General touched him gently with his foot, and said, “Why, my man, I am ashamed of you, dodging that way,” and repeated the remark, “they couldn’t hit an elephant at this distance.” The man got up and saluted, and said, good-naturedly, “General, I dodged a shell once, and if I hadn’t dodged, it would have taken my head clean off. I believe in dodging.”
The General and some of the men in the rifle pits who had heard that remark laughed, and the General replied “all right my man; go to your place.”
Another of the same kind of bullets passed while I was standing talking to the General in a low voice, about something which I have never since been able to recall. Then a third time the same shrill whistle closing with a dull heavy stroke interrupted me, and I remember distinctly that I commenced to say, “General, they are firing explosive bullets,” when his face turned slowly to me and the blood spurting from his left cheek under the eye in a steady stream, brought to me the first knowledge of our great disaster. He fell in my direction, and I was so close to him that my effort to support him failed, and I went to the ground with him. 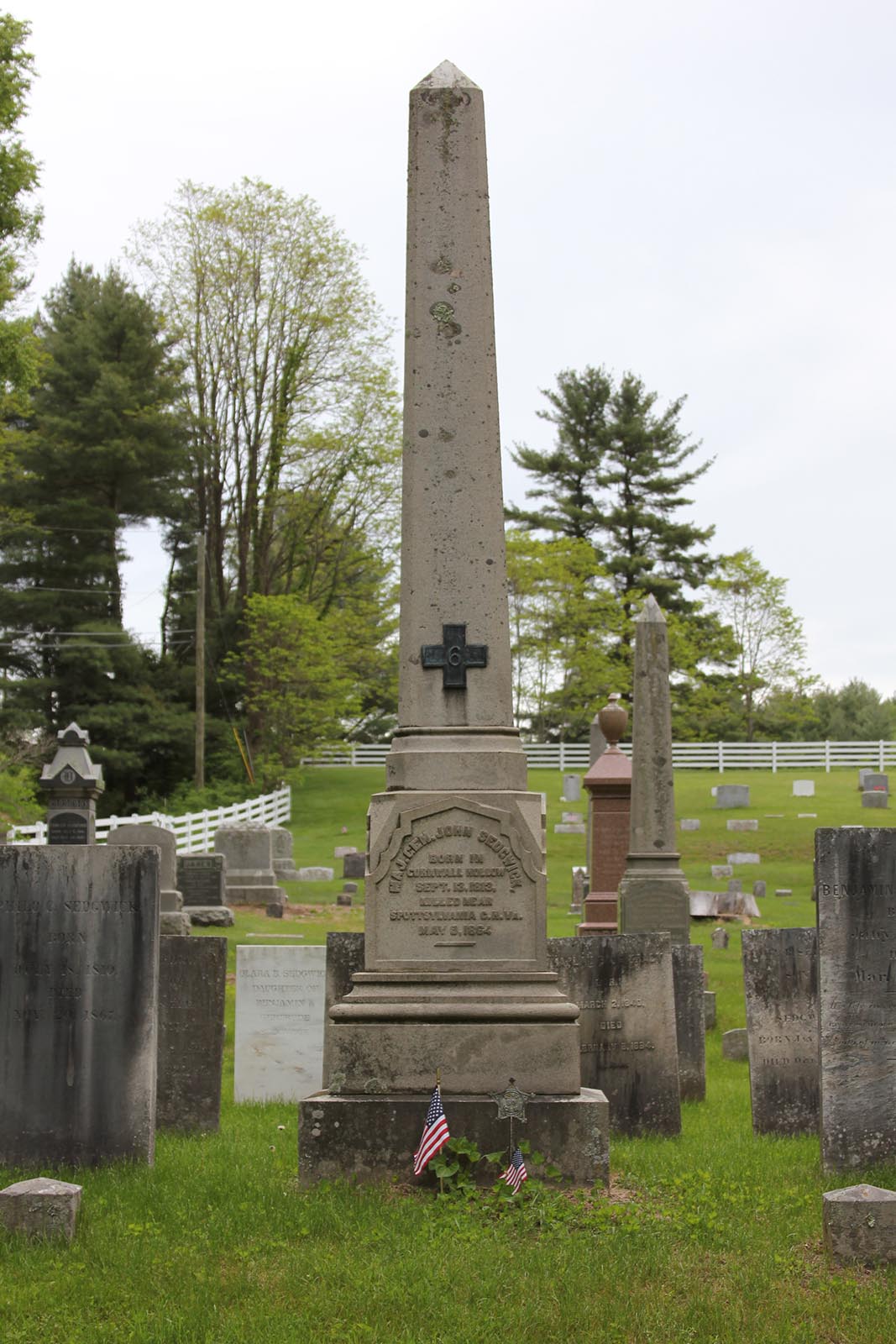 The same coolness under fire that earned Sedgwick high praise during the Mexican War proved his undoing in the Civil War.

In all that great army, struggling in the slimy toils of the Peninsula, there was no officer more trusted and beloved than this most unobtrusive man, this most ideal American soldier. In person not tall, with dark hair, dark, almost still eyes, with the tranquil aspect of reserved power, a man who did not talk much or loudly, but who was always gaily chaffing his associates, who was smilingly suspicious of newspaper fame, and never went to Washington; a man of iron will, promptly obedient, and therefore requiring exact obedience; in council clear and swift, in action every faculty nimbly alive, his powers intensely concentrated, his soul glowing with eager purpose, as at a white heat, but not mastered either by victory or defeat—he had all the cardinal soldierly qualities, the positive masculine manly traits, but with them that depthless tenderness and sweet humour which complete the finest natures.

~ George William Curtis, Oration delivered at the dedication of the statue to Major-General John Sedgwick, at West Point, October 21, 1868