Sarah Northrup and Harriet Gold created national scandals in 1824 and 1826 when they married Cherokee men who had come to Cornwall as students at the Foreign Mission School. Racist mindsets of the era could not tolerate the thought of a respectable white woman marrying a “savage Indian.” Sarah and Harriet stood strong against the public outcry and persuaded their families to support their marital choices. They struggled against racial prejudice for the rest of their lives, with both whites and Cherokees viewing their mixed-race children as something other than themselves.

When Sarah married John Ridge in 1824, the public was outraged and horrified. Rumors flew around the country, some claiming that Sarah’s father was insane and had abandoned his family, others that the marriage ceremony was performed secretly, still others that Sarah was only 16 (she was 20) and that John was abusing his new bride.

Conspiracy theorists speculated that the Foreign Mission School had orchestrated the marriage and was plotting to pair up more of its students with white women in order to fully Christianize them. At least one newspaper condemned Rev. Dr. Lyman Beecher, who was connected to the school, for “being instrumental in bringing about this unnatural and semi-savage connexion, and transforming an interesting young lady of 16, into an Indian Squaw.”

Sarah settled happily into her life in the Cherokee Nation, the wife of a wealthy and powerful man, but her happiness was short lived. Increasing tension with Georgia and the United States would lead to tragedy, first the Trail of Tears in 1837, then the assassinations of John Ridge and Elias Boudinot in 1839. Harriet died in 1836, but Sarah lived to see her husband brutally murdered.

John Ridge, his father, and Elias Boudinot were among a group of twenty Cherokee who signed the Treaty of New Echota with the United States in 1835, agreeing that the Cherokee Nation would relocate to the Indian Territory in the West. The Ridge and Boudinot families liquidated their assets and began building their new farms in what is now Oklahoma in 1837.

The Ridges had been optimistic that most of the Cherokee would agree to relocate. When they didn’t, the U.S. forcibly relocated them on what became known as the Trail of Tears; roughly twenty percent of the Cherokee died en route to the Indian Territory. John Ridge, his father, and Elias Boudinot were blamed for the deaths of some 4,000 people. 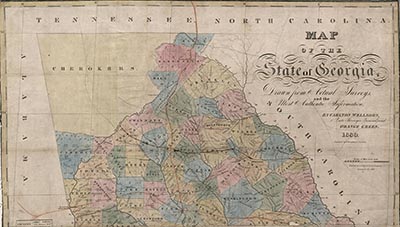 Early in the morning of June 22, 1839, John Ridge was dragged from his bed to the yard outside and brutally assassinated in front of Sarah and their children. Sarah tried to rush to his aid, but she was held back by gunmen while her husband was stabbed twenty-nine times. Their son would later write that Sarah “had given him her heart in the days of her youth and beauty, left the home of her parents, and followed the husband of her choice to a wild and distant land.”

Following the assassination, Sarah wrote to the U.S. Secretary of War, John C. Spencer, stating that she feared “every night our sufferings would be terminated by assassination from the murderers of my husband.” Her farm was plundered daily by vengeful Cherokee, who slaughtered the cattle, chicken, and pigs and let their horses run loose through the corn fields, destroying much of the crop.

Sarah gathered up her family and fled to Fayetteville, Arkansas. She brought with her Sophia Sawyer, a missionary from New Hampshire whom the Ridges had supported as their children’s teacher. In Arkansas, Sophia started a new school for Sarah’s children and for the children of other Cherokee refugees. The school became the Fayetteville Female Seminary, enrolling both Cherokee and white girls.

Sarah eventually returned to the Indian Territory to fight, successfully, for her children’s inheritance. John Ridge had died without a will, and his sister and her husband attempted to disinherit his children on the grounds that their mother was white, not Cherokee. John’s estate was finally settled, with his children regaining their inheritance, in 1847.