An advertisement in the Litchfield Monitor newspaper is the only known record of Sally Elgar’s life. The advertisement was posted by her husband, presumably following a dispute or, perhaps, many years of marital difficulty. For whatever reason, Sally left her husband.

Divorce was permitted in Connecticut, but only if the spouse could prove “adultery, or fraudulent contract, or willful desertion for three years with total neglect of duty; or in the case of seven years’ absence.” 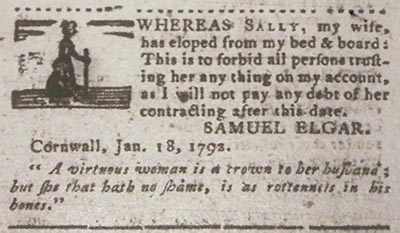 Advertisement in the Litchfield Monitor, February 1, 1792.