Fifth Connecticut Volunteer Infantry
More than two dozen men from Cornwall enlisted in Company I of the 5th C.V.I. in the summer of 1861. A few men from nearby towns, including Roxbury, Plymouth, and New Milford, also enlisted at Cornwall during those early months. A handful of others enlisted or were drafted into the regiment in the ensuing years.

Among the first men to join the 5th C.V.I. were several English and Irish immigrants employed by the West Cornwall shear factory. The other volunteers included farmer laborers, carpenters, and colliers. Of the thirty-two men who joined the 5th C.V.I., six died during their service.

Eleventh Connecticut Volunteer Infantry
Ten Cornwall men enlisted in the Eighth C.V.I. between October and December, 1861. Two others were transferred to the regiment at later dates.

Thirteenth Connecticut Volunteer Infantry
Company C of the 13th C.V.I. was raised by West Cornwall’s Charles D. Blinn, his uncle Isaac F. Nettleton in Kent (originally from Cornwall), and Charles E. Tibbets of New Milford. Recruiting offices were set up in Cornwall and Kent, and the company of 83 men consisted almost entirely of Litchfield County residents. Company C marched to New Haven in November 1861. They served as the color company for the regiment, carrying the flags of Connecticut and the United States into battle.

Nineteenth Connecticut Volunteer Infantry / Second Connecticut Heavy Artillery
The 19th C.V.I. was formed in Litchfield County in July and August of 1862. Most of the enlistments from Cornwall during those months joined Company G, along with men from Sharon. The regiment mustered on the Green in Litchfield on September 11, 1862 and departed for Alexandria, Virginia a few days later. The 19th C.V.I. was assigned to patrol duty in and defense of Washington, D.C. until May 1864.

On November 23, 1863, following an inspection by Secretary of War Edwin Stanton, the regiment was designated the Second Connecticut Heavy Artillery. A new wave of recruits joined the regiment during the ensuing months. 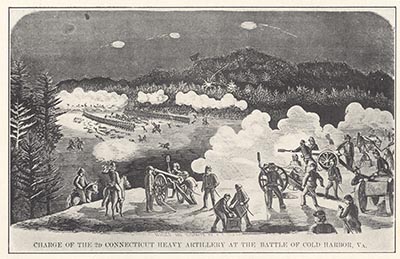 Charge of the 2d Connecticut Heavy Artillery at the Battle of Cold Harbor, Va., published in The County Regiment by Dudley Landon Vaill, 1908.

Twenty-Ninth Connecticut Infantry Regiment
The U.S. War Department ordered the formation of regiments of “United States Colored Troops” on May 22, 1863. The regiments, comprised of black men led by white officers, were formed under state designations and were later designated as United States regiments. In Connecticut, recruitment of African Americans began in August 1863. By January of 1864, the 29th Connecticut Regiment Infantry, Colored was full, and the 30th was being organized.

The 29th regiment arrived in Maryland in March, then traveled on to Hilton Head, South Carolina, arriving there on April 16, 1864. The soldiers’ pay caused some initial dissent. During their enlistment, the recruits had been promised bonuses totaling $685, but received only $310. Upon arriving in South Carolina, they discovered that their monthly pay would be only $7 per month, less than half what the white soldiers were paid. The matter was resolved by a visit from General Saxton, who declared that they would receive the same pay as white soldiers. The shortfall in bonus pay was never corrected.