Four Cornwall soldiers are known to have been held in Confederate prison camps during the war. Two were held at Andersonville, one at Florence. A fourth, Josiah Corban, was held at an as-yet unidentified prison camp after being taken prisoner at Snicker’s Gap, Virginia on July 24, 1864. 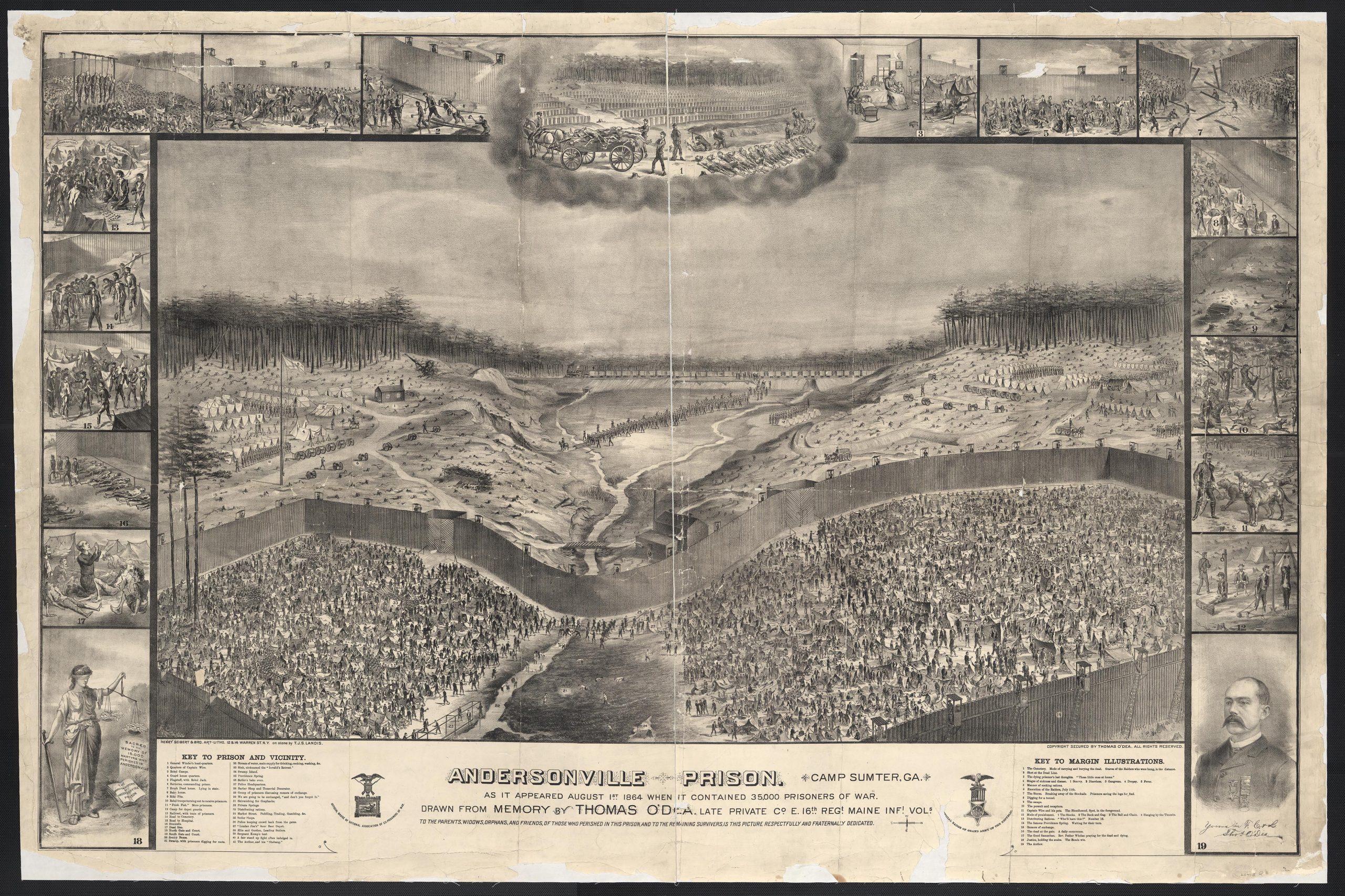 The Confederates established the Andersonville prison camp at Camp Sumter, Georgia, in January, 1864. During the camp’s fourteenth months of operation, it held more than 45,000 Union soldiers, of whom nearly 13,000 died.

Although Andersonville is now the most notorious of the Civil War prison camps, it was not the only one at which soldiers suffered from starvation, malnutrition, and disease. During the first two years of the Civil War, prisoners were more likely to be exchanged than held in camps, but this changed in 1863. Prison camps proliferated on both sides. President Lincoln introduced regulations for the treatment of prisoners of war as part of a larger code of conduct for war. The “Lieber Code” of 1863 specified that captured soldiers were the prisoners “of the government and not the captor” and should be accorded basic human rights.

Two men from Cornwall, Cpl. Pierre Guy and Pvt. Martin Hull, were imprisoned at Andersonville. Guy survived and was paroled; Hull died from disease and malnutrition on August 27, 1864.

The Florence Stockade prison camp, modeled after Andersonville, began operation in September, 1864. Located in Florence, South Carolina, the camp held about 18,000 Union soldiers as prisoners of war, of whom more than 2,800 died. This illustration of an incident at the camp was created for an account written by one of the former prisoners.

Cornwall’s Pvt. Tracy Bristol, serving with the 5th C.V.I., was captured on November 19, 1864 during Sherman’s March to the Sea, from Atlanta to Savannah. Bristol was sent to the Florence Stockade prison camp. He died there on January 8, 1865. 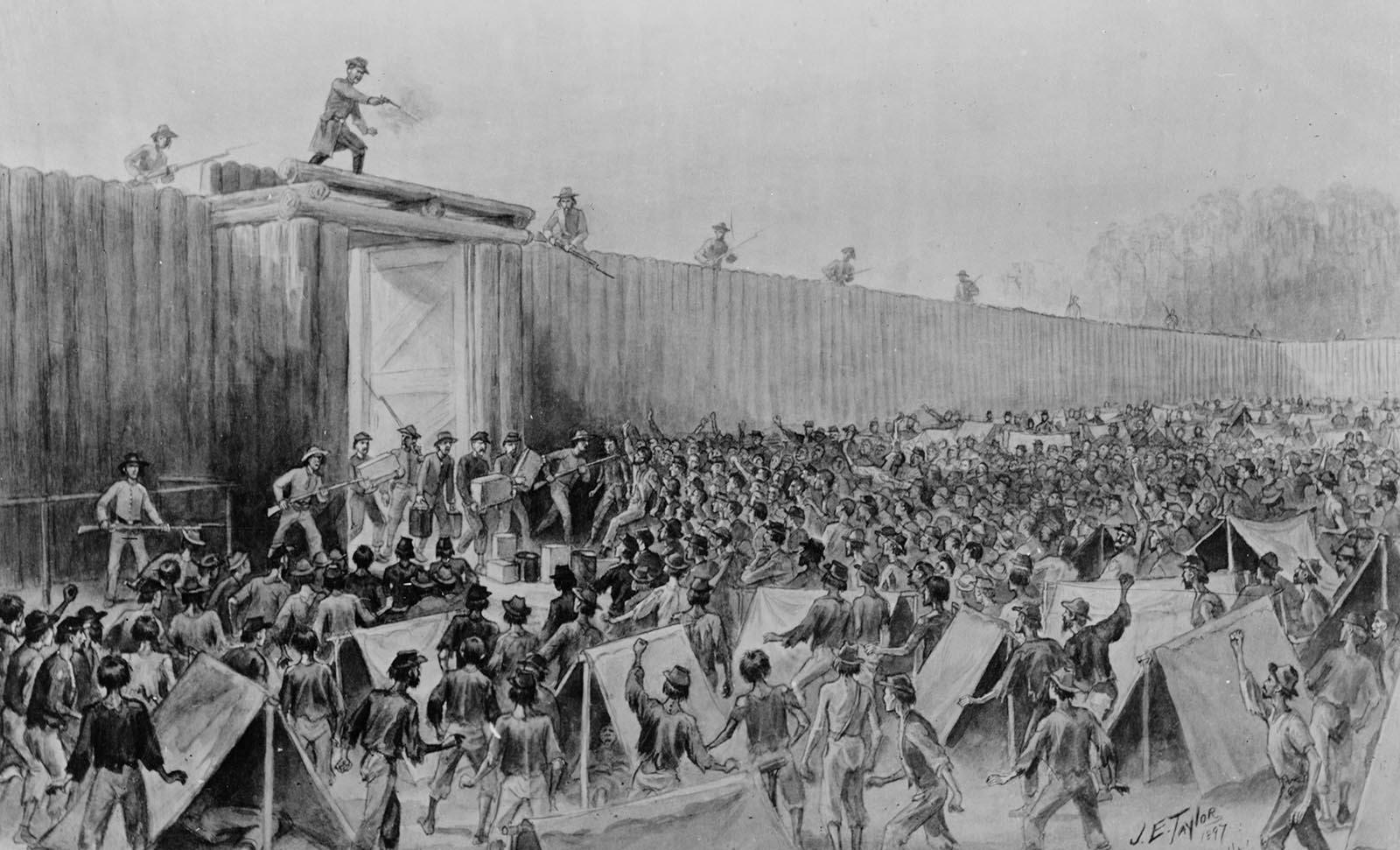 The Doctors, one of them, came around yesterday to get the names of the Parole Prisoners; also when & where they were captured, when & where released, so they could make arrangements to pay them all their back pay & also their ration money while they were prisoners. They are going to pay us up pretty soon, & then give us 30 days furlough to go home. That is an order from the war department. & I suppose I can have another furlough if I want it. We all have to wear Hospital shirts. I wear a woolen one under the cotton one that they furnish. They brought in some Drawers but they were so short & small I could not wear them. The most of them were just so, but I shall get along if they will let me wear my own. …My boils have got pretty much done running, but I am so sore yet I can’t sit with much comfort & my Scurvy comes out as bad as ever yet. How long it will continue so, I don’t know, but guess the way I am doctering for it will prove a remedy after a while. I have only just begun on my butter & my Sausage… I shall have to let some one help [me] eat it, I guess, for they don’t allow me to have much meat & I intend to be as careful as possible about eating such things as will hinder me about getting rid of my scurvy.

~ Josiah B. Corban to his wife and children, Annapolis Junction, December 10th, 1864
(Courtesy of The Connecticut Historical Society)