For some women, even fewer rights existed. Peg, an African American woman, was enslaved in Cornwall by the Congregational minister, Rev. Mr. Hezekiah Gold. When he died in 1790, Peg became the property of his son, Joseph Wakeman Gold.

In 1792, Peg sought her freedom, appearing before the town’s Justices of the Peace, John Pierce and Edward Rogers. They drafted a brief certificate stating that “Pegg a Negro Woman who is a slave to Mr. Wakeman Gold of said Cornwall is in good Health, under the age of forty-five years, above twenty-five years of age, and Desires to be made free.”

Slavery was legal in Connecticut during this era, but it was on its way out. In 1784 the state established an Act to Prevent Slavery, banning the importation of slaves and guaranteeing that all children born into slavery after March 1, 1784 would be granted their freedom upon reaching the age of 25. The act is sometimes referred to as the “Gradual Emancipation” law, because it established a system to gradually abolish slavery in Connecticut.

The Act to Prevent Slavery also established guidelines for any slave owner wishing to emancipate his slave, requiring the slave owner to apply to any two members of the civil authority (such as the Justices of the Peace) for permission to free his slave. If the enslaved person was in good health, no older than 45 and desired to be made free, then he or she would be emancipated. 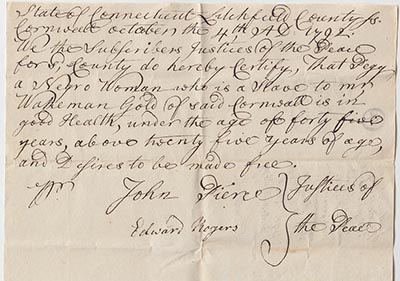 I the Subscriber, being the Owner of a certain Negro Woman, who is a Slave more than twenty-five Years of Age, and under forty-five, and in good Health, as by Certificate of two Justices of the Peace for the County of Litchfield may appear, and being willing and disposed to Emancipate and set said Slave (whose name is Peg) free.
These are therefore to Certify, That I do this Day Emancipate and Set free the said Peg, and relinquish all Claim, Right or Demand to the Person or Service of said Peg from this Day forward, for my Self, my Heirs, Executors or Administrators. In Witness whereof, I have hereunto Set my Hand, this 22nd Day of November, Anno Domini 1792.
Joseph W. Gold
In Presence of
Hercules Weston
Asaph Conners
The foregoing Certificate was received Nov. 1st and 27th and recorded by Judah Kellogg Town Clerk

Gold continued to be a slave owner for the rest of his life. He left Cornwall in 1796, moving to the town of Pompey, NY, where he continued to keep at least one person, a man named Prince, enslaved in his household.

On November 29, 1792, one week after being granted her freedom, Peg married a Litchfield man named Cesar. The church record of their marriage noted that Peg was “a negro woman, freed by the Rev. Mr. Gold’s heirs,” while her new husband was “a free negro man.” Cesar was listed in the 1790 Census with no last name; in the 1800 Census, his last name was Barber.