Patience “Patty” Swift grew up in Cornwall but left to teach school in Stamford and, later, Philadelphia. She appears to have had an adventurous spirit, traveling to distant towns alone as a single woman, rather than settling in one place, close to friends and family. By 1816, she was living in Lumberland, New York, just north of the juncture with New Jersey and Pennsylvania.

In Lumberland, Patty met Thomas Lippincott, seven years her junior, who described himself as “a godless young man, and in belief a Universalist.” Thanks to Patty’s strong faith, Thomas rediscovered God and later became a Presbyterian minister. The two were married at Lumberland in 1816. The following year, Patty, Thomas, and their newborn daughter, Abia, set off on a nearly three-month winter journey to Illinois, not yet a state.

The Lippincotts traveled first to Pittsburgh, where they chartered a Monongahela flatboat with another family. They spent the month of December, 1817, traveling by flatboat to Shawneetown, Illinois. After several weeks at Shawneetown, they set out by wagon to St. Louis, Missouri. The road was a path through the woods, the trail indicated by hack marks on the trees. They finally arrived in St. Louis on February 17, 1818.

The Lippincotts settled for a time at nearby Milton, Illinois, where Thomas ran a dry goods store. Patty, who had supported herself as a teacher for more than a decade, was not content to simply run the family household. She began teaching a Sabbath school, instructing all fifteen or twenty children of the town in religion every Sunday. Her husband later wrote that she “could not be satisfied without this effort.” Sabbath, or Sunday, schools were a relatively new concept, introduced in England a few decades earlier.

Patty’s Sabbath school was the first Sunday school in Illinois, although historians in the late 1800s preferred to give that title to a school started a year later by a pair of men. Curiously, Patty’s own husband also disparaged her efforts, writing that the later Sunday school, which operated for only five months, was more deserving to be called the first in Illinois.

Patty Swift Lippincott died in the fall of 1819 from complications related to childbirth. 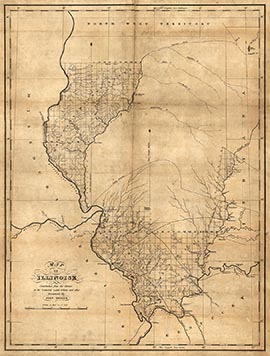 Illinois in 1818, when Patty Swift Lippincott and her family moved there. Illinois became a state on August 26, 1818, six months after the Lippincotts arrived.
(Collection of Library of Congress, Prints and Photographs Division)