Naomi was born in Vermont, possibly in Bennington, in April of 1794. Little more is known about her origins. In January of 1797, Omia (as she was then called, most likely a nickname for “Naomi”) was in the care of Mary Ann Swift, the wife of Rev. Job Swift of Bennington. Mary Ann’s sister, Abigail Sedgwick of Cornwall, traveled to Vermont to bring Naomi to Cornwall. The reasons for this are unknown. Because Naomi was African American, she would have been safer in Vermont, where slavery had been outlawed in 1777 and completely abolished in 1790.

In 1801, Abigail Sedgwick’s husband, General John Sedgwick, officially adopted Naomi, declaring that she was “entitled to the same freedom at the same age” as his own children. Connecticut laws at the time placed Naomi in danger of being legally enslaved until she reached the age of 25. Sedgwick’s adoption of Naomi protected her from that threat.

When General Sedgwick died in 1820, he remembered Naomi in his will, leaving her some personal property, including his collection of religious books.

In 1826, Naomi married Obed Freeman, who had previously been enslaved in Cornwall. At the time of her marriage, she was living in Canaan and had the surname of Cain. The couple settled in Cornwall.

Naomi Freeman had been married for two years when she purchased an acre of land with a dwelling house in Cornwall. It was rare for a married woman to purchase real estate at this time. In Connecticut, no laws existed protecting a woman’s right to own property. Married women were allowed to distribute their property through a will, but a married woman’s property was listed in the tax rolls under her husband’s name, not her own. 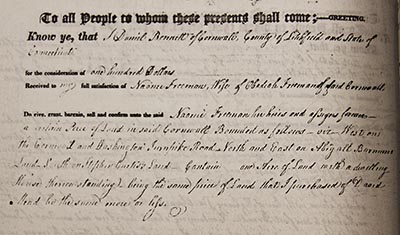 Naomi Freeman’s Deed for “one acre of land with a dwelling House thereon,” August 27, 1828.
(Courtesy of the Town of Cornwall)