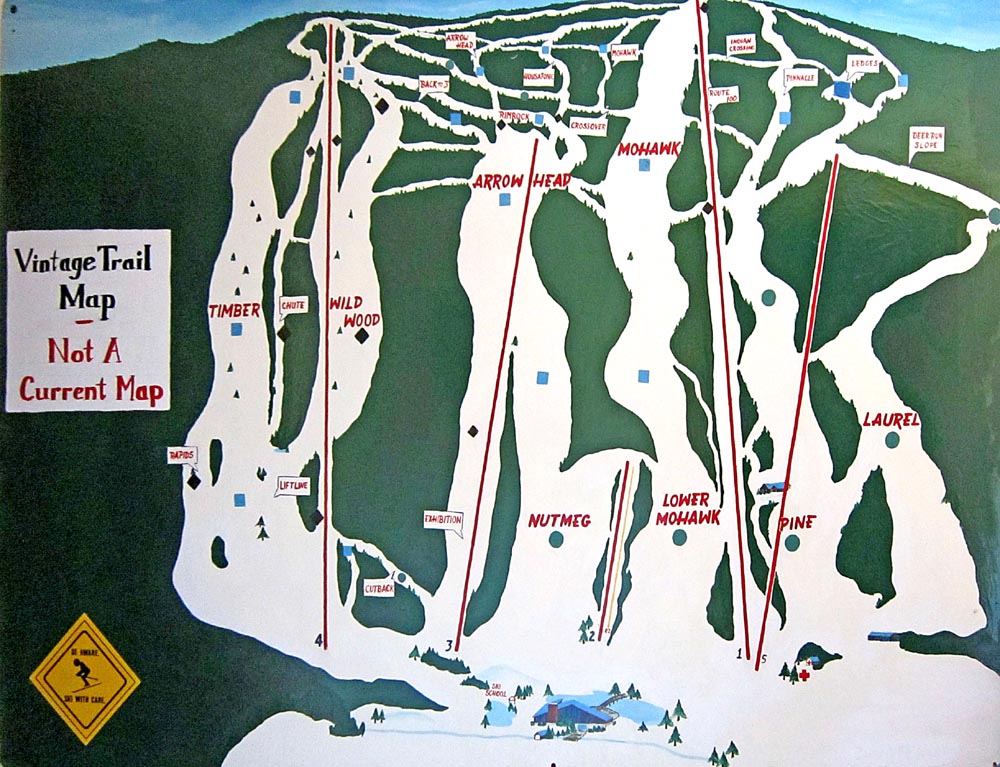 At Mohawk State Park, skiing became increasingly popular after 1933. Some of the roads through the forest were turned into ski trails. The Camp Toumey CCC workers built the first downhill trail in 1939 under the direction of Rolf Holdvedt and the Connecticut Ski Council.

Ski slopes are closely associated with pine trees. While they create an Alpine look, they also help reduce the effect of wind on the snow. Pine trees are also used as a visual guide, distinguishing one trail from another.

“What could be more delightfully romantic than a run on ski through a snow-clad pine wood by moonlight?”

In 1946, Walter R. Schoenknecht (pronounced “shawn-connect”) began leasing the northwest side of Mohawk Mountain from the state and developed a ski resort area. It opened with six trails and tows. 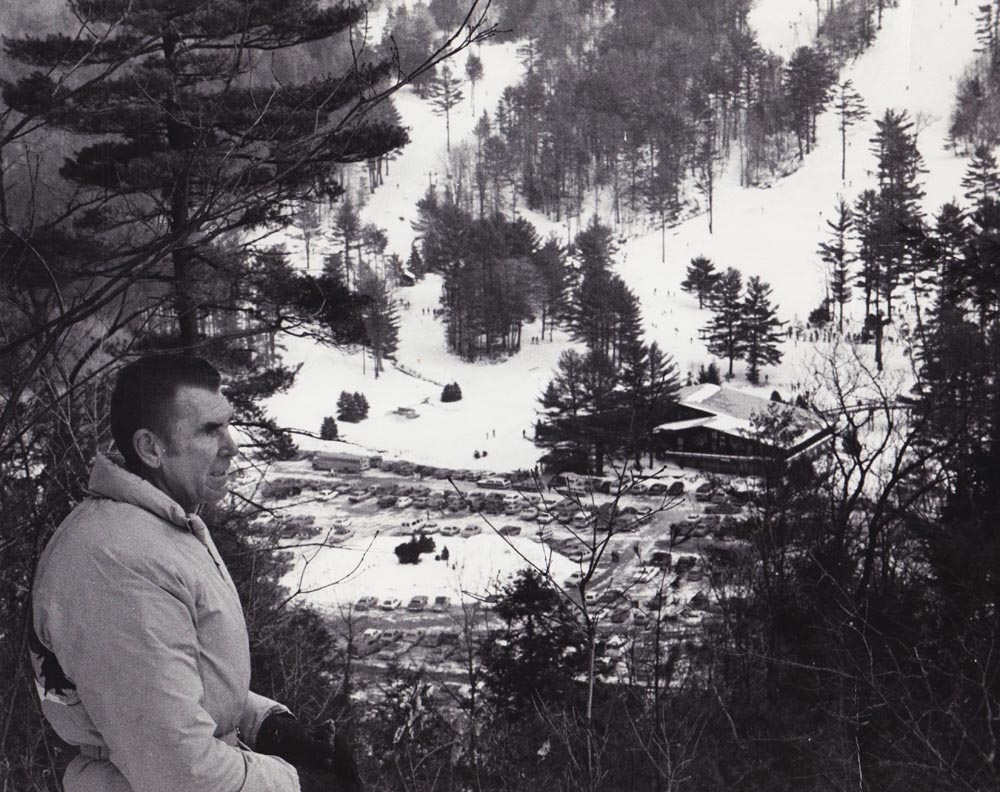 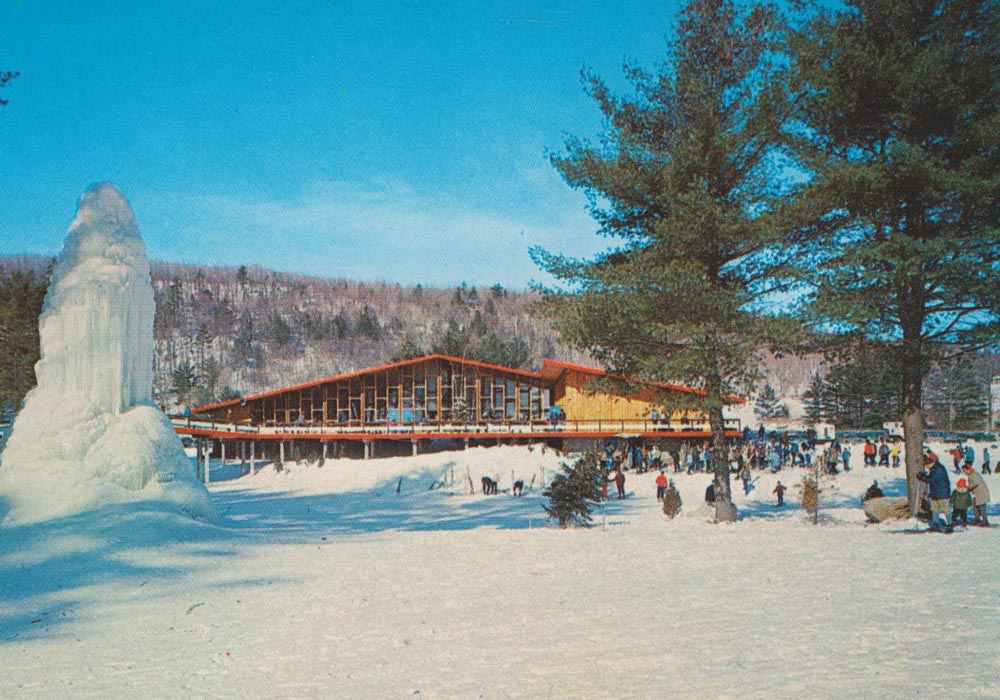 Walter’s father, Henry Schoenknecht, planted specimen trees from his nursery in East Haven and contributed the stone and design for the fireplaces at Pine Lodge. Peg Schoenknecht, Walt’s wife, managed the finances of the business.

Skiing at Mohawk was expanded to a total of nine trails and nine tows in 1948 (there are thirteen trails today). The parking area was doubled in size to accommodate about 600 cars. 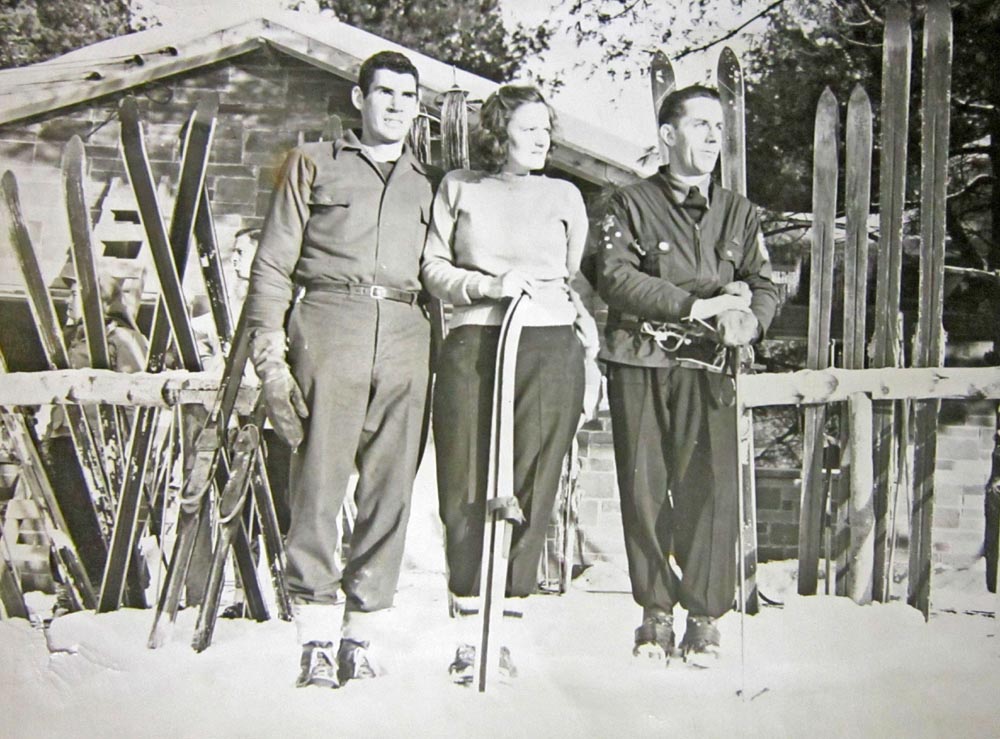 Walt and Peg Schoenknecht with Edwin Eaton, Regional Director of the National Ski Patrol at the base of Pine Lodge, circa 1950
Courtesy of Mohawk Mountain Ski Area 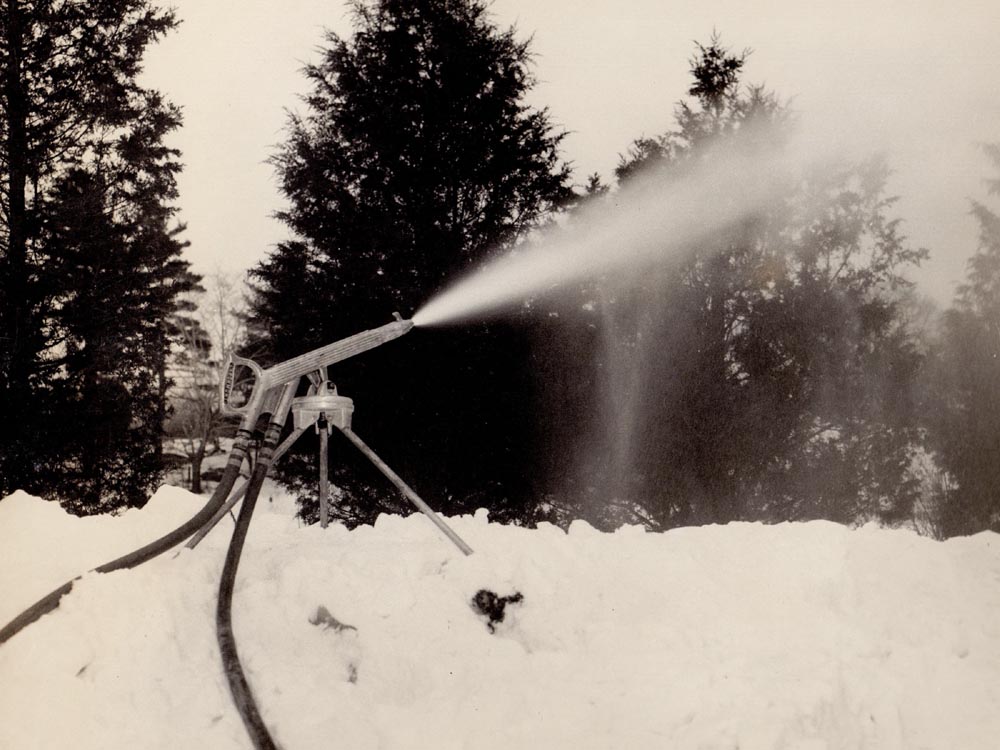 The winter of 1948-49 was a difficult one for skiing in Connecticut—hardly any snow fell all winter. Walt Schoenknecht rose to the challenge and began experimenting with artificial snow. His first effort involved grinding up blocks of ice brought in from Torrington, but this was not very effective.

By October 1950, Schoenknecht had begun experimenting with an idea that would revolutionize skiing. His inspiration came from the pumps and nozzles used to spray compressed air and water on tobacco crops in the Connecticut River valley.

Schoenknecht contacted Larchmont, which made the equipment, and worked in collaboration with the Tey Manufacturing Company of Milford to develop a snowmaking machine that mimicked the natural atmospheric process that produces snow. 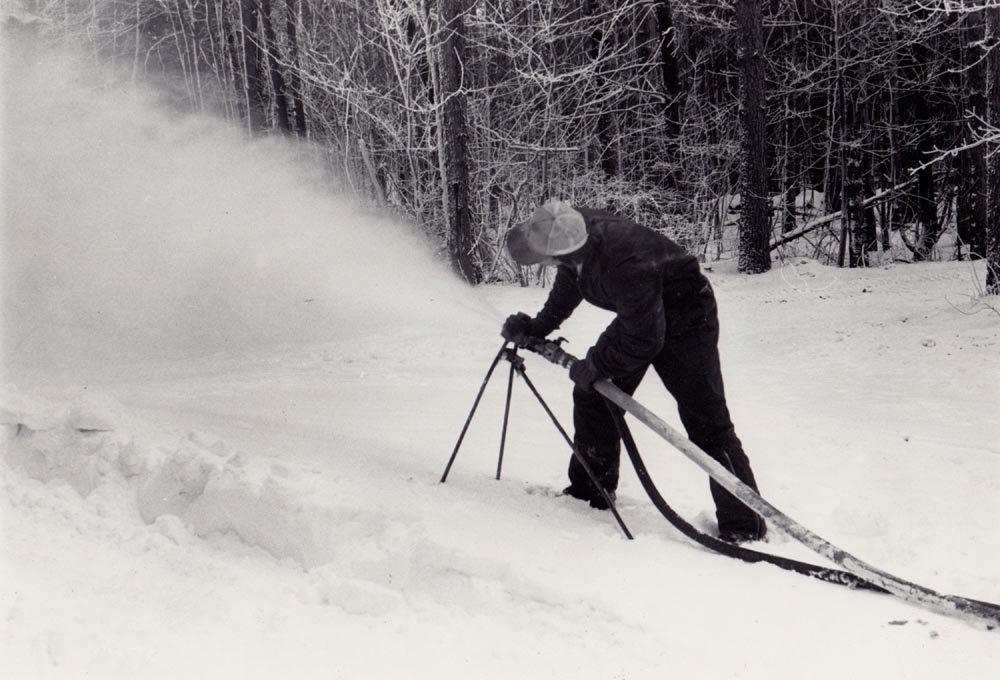 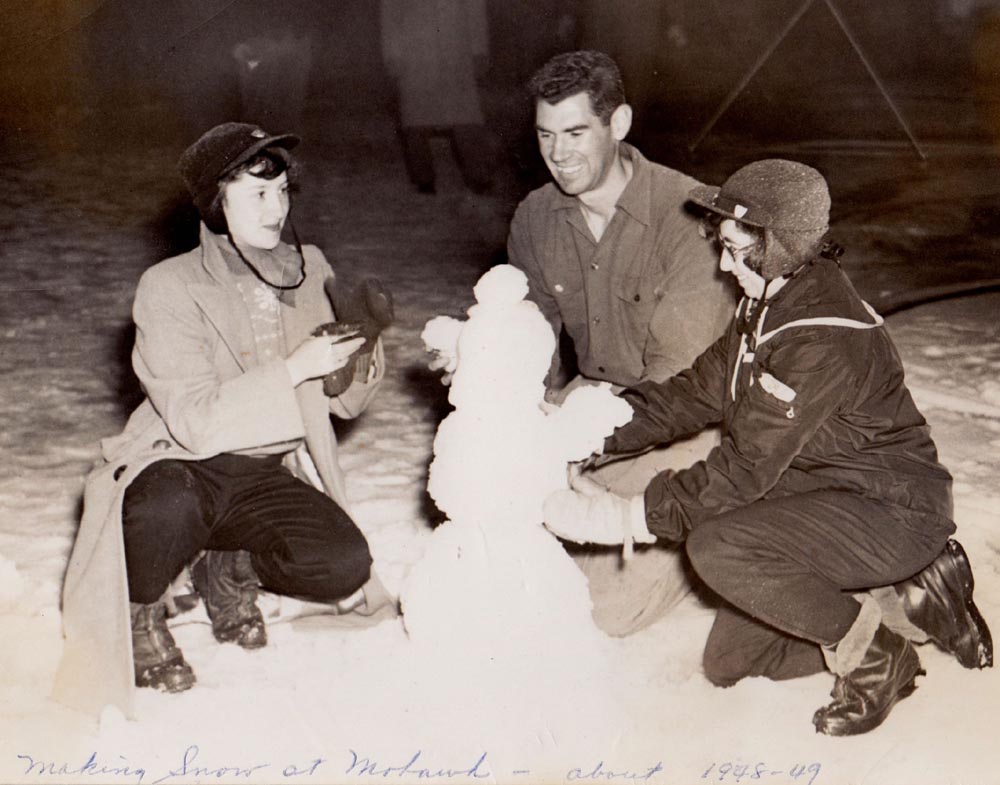 The first model snowmaking machine was tested at 3 a.m. and emitted so much noise the Cornwall Fire Department was called by neighbors. After some modifications to the nozzle, the equipment was tested again a few nights later. This time it emitted an ultrasonic whistle that made all the dogs in the area bark. More adjustments were made.

Today, 95% of Mohawk’s snow is man-made, producing a consistent surface for skiing.

The Mohawk ski area became an integral part of the Cornwall community in 1949, when Schoenknecht established a free skiing instruction program for students at the Cornwall Consolidated School. 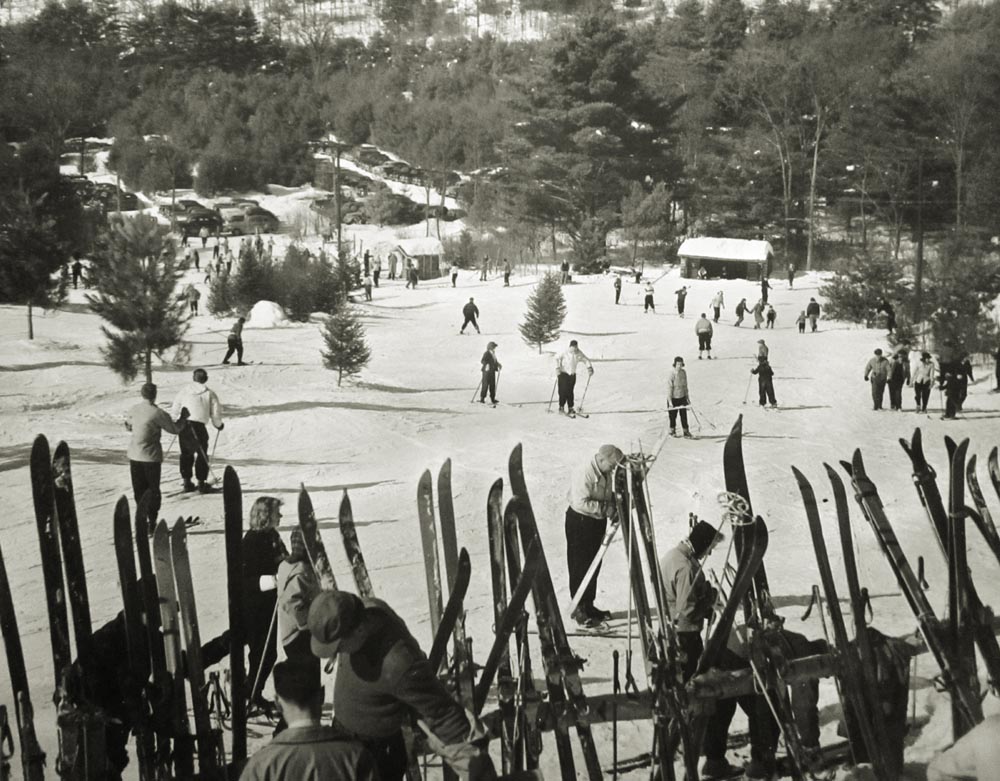 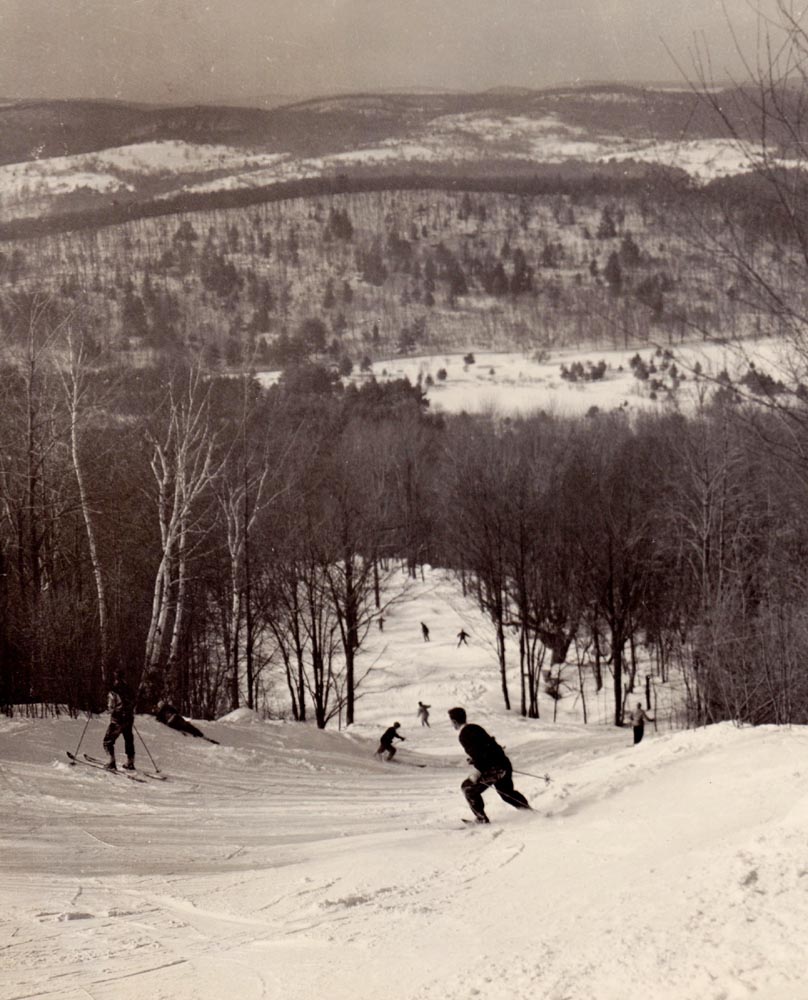