A graduate of Wesleyan University, May Stockbridge Finney Wilford was the first woman from Cornwall to be elected to the State House of Representatives, in 1929. At the time, there were so few women in the legslature that there was only one toilet available for them, tucked away in an unfinished part of the capitol building’s third floor.

In 1929, Wilford was one of a handful of legislators who bravely flew in a monoplane to conduct an aerial inspection of Hartford’s airport, Brainard Field.

May Finney was born and raised in Hartford. After earning her Ph.B., she worked as a grammar school teacher in New Britain and Branford during the 1890s. As was expected at the time, she left her job when she married Bernard Wilford in 1900. The couple lived in Branford, where Bernard was employed at a paper company.

At some point before 1920, the Wilfords moved to Cornwall Bridge, where Bernard became a farmer. After their three daughters and one son were grown, May entered into politics. 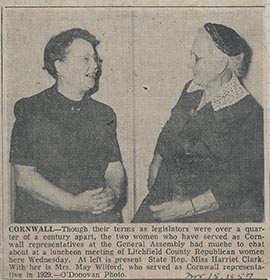 While away teaching school, I often found it convenient to leave my winter garments stored in the attic of my boarding house from one year to the next. As my boarding mistress and myself objected strongly to moth balls, we tried another scheme. We sprinkled each garment liberally with pepper, ordinary black pepper. Then the next autumn they were hung out of doors for one breezy day and we had no months and no disagreeable odor.