Mary Chapin spent much of her childhood in her mother’s, Sarah Pierce Chapin’s, hometown of Cornwall, receiving part of her early education here. Her uncle, Seth Pierce, was one of the wealthiest landowners in Cornwall, and Mary most likely lived with his family when she was here.

In 1837, at the age of 17, Mary became one of the first students at Mount Holyoke, the first college for women. After graduation, she returned briefly to Cornwall to teach, before being summoned back to Mount Holyoke as a teacher.

Mary was the second principal of Mount Holyoke, guiding the school through years of difficult finances made worse by the Civil War. Under her leadership, the school building was expanded, facilities for teaching astronomy were improved, and calisthenics was replaced by light gymnastics.

Mary Chapin retired in 1865, marrying Claudius Pease that year. She continued assisting the college after her retirement, handling alumnae affairs from home. 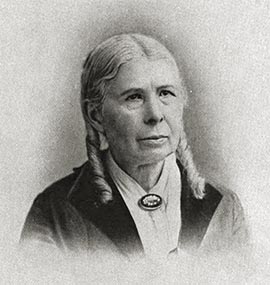