Lydia Mariah Brewster, daughter of a Cornwall farmer, married Rollin Hubbard in 1869 and moved briefly to Indiana, then Ohio. Mother to seven children, she made time for her art wherever she lived.

Prior to her marriage, during the Civil War, she taught drawing at the Cream Hill Agricultural School in Cornwall. Later, in Ohio, Lydia studied with the Toledo Academy of Arts’ Director, Edmund Osthaus, a German artist. In 1883, she was a founding member of the Toledo Art Association, which offered classes and organized exhibits. Lydia also made annual springtime trips to New York City to study painting, leaving her children in the care of a family servant.

In Toledo, Lydia had met the painter James Henry Moser, who married Lydia’s cousin, Martha Scoville. The Mosers spent their summers at Cream Hill next door to Martha’s parents. While in New York, Lydia became friends with another artist, Ben Foster, and encouraged him to spend his summers in Cornwall, where he rented a house on Cream Hill. The group was joined by painter Charles Foster and violinist Ben Gilbert, creating a lively artists’ colony during the summer months in the 1890s.

Sometime after 1900, Lydia began spending the winters with her daughter, Winifred, in Los Angeles. She painted landscapes at San Juan Capistrano and along the California coastline. She died in Los Angeles in 1911. 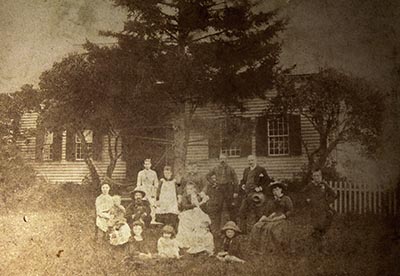