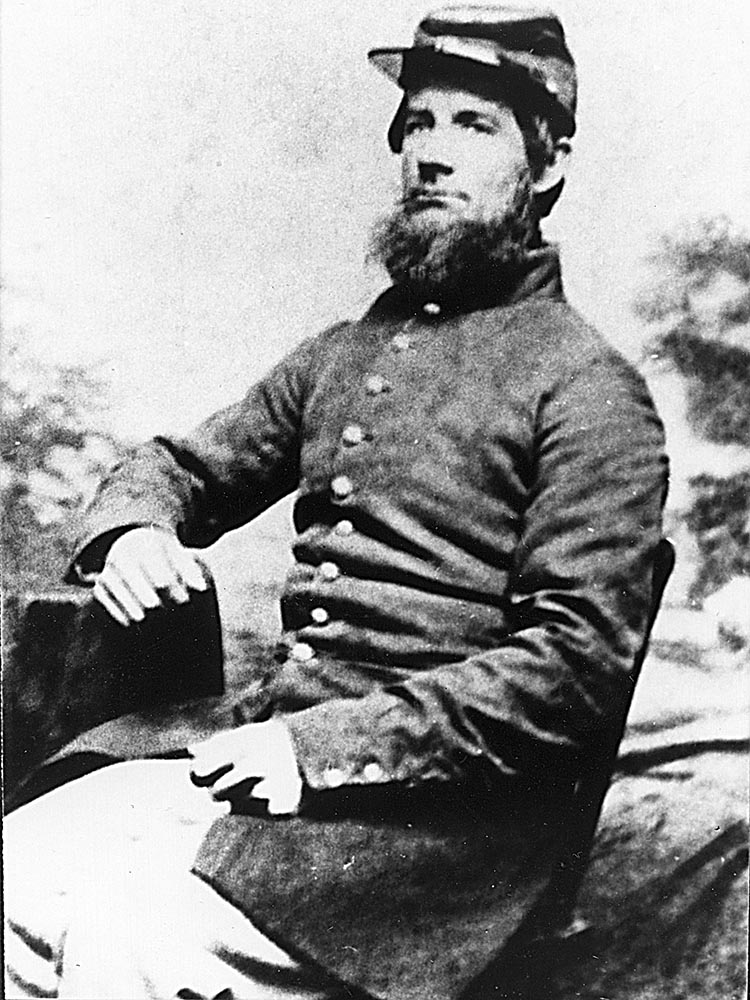 Josiah B. Corban, circa 1863.
(Courtesy of the Winchester-Frederick County Historical Society, Winchester, Virginia)

Josiah Corban was a Cornwall farmer, married with three children. He enlisted with Company G of the 19th C.V.I. (later the 2nd Heavy Artillery) on August 4, 1862. Judging from the letters he wrote to his wife, Corban was motivated to enlist largely out of patriotism.

On July 21, 1864, Corban was taken as a prisoner of war by Confederate troops at Snicker’s Gap, Virginia. Corban was released to the Union in poor condition, suffering from boils, scurvy, and malnutrition. He recovered at the Annapolis Junction military hospital from December 1864 until January 1865 and received a disability discharge on May 11, 1865.

A large collection of letters written by Corban during the Civil War are now in the archives of the Connecticut Historical Society. His diary and photograph are in the Stewart Bell Jr. Archives Room, Handley Regional Library, Winchester-Frederick County Historical Society in Virginia.

Letter to his wife and children (Courtesy of the Connecticut Historical Society):

Dearest of earth, I received yours of the 6th to day and wonder why it should be so long on its way here. I sent one this morning that I had written by having two or three spells at it before I finished it. They keep us very busy now a days so I cannot often get a chance to write but a short time at once without writing nights, and then I generally have to buy a candle to see by, if I have a chance to see well enough to write. We use sperm Candles here, they cost five cents apiece. One will last nearly two evenings if we don’t sit up long after Roll call, which is at half past eight.
…the Lord only knows what trials we may be called to pass through before peace will be declared and the Rebels be made to give up their Rebellion. The Governor of Connecticut, Buckingham, was here yesterday. He came on to the ground where we were on Battallion drill. In a short time after he came on to the Parade ground. We were ordered to form a square, and he and those that were with him besides all our Commissioned Officers went inside the square. The Lieutenant Col. introduced them as well as all the rest of us to the Chief Magistrate the Governor of Connecticut William A. Buckingham and told them they could speak to him, any of them that wished to. The Captains and Lieutenants all went up and shook hands with him and some of them talked with him a few minutes. Then he took off his hat and made a short Speech to us. He spoke with a great deal of feeling in our behalf and told us how much he thought of us as well as all the rest of the troops from our state and said that he would be glad to shake hands with every one of us. He praised us for our Patriotism in leaving our homes and friends to come down here to fight for our Country and said if we never went to the field of battle we were doing as much good as if we did. He said it was better to sacrafice [sic] a whole Generation than to have our Government destroyed. He is a plain looking man and I don’t think it makes him feel lifted up any by being Governor. He did not talk as if he had any idea of the North ever giving up the Contest till the Rebels are Conquered and made to return to the Union. It brought tears to my eyes to hear him speak of the loved ones at home. It touches my feelings very sensibly to hear anything that relates to my loved ones at home for they are nearer my heart than any other earthly object. May God grant that I may meet them and all the rest of my friends once more in Cornwall, and also in Heaven at last.
Yours with undying affection,
J. B. Corban

Monday May 30 [1864] Hot & dry as ever. We keep on the march. Fighting some about every day & get some prisoners. Staid in the woods wearied almost to death trying to keep with the reg’t. Brisk fighting going on in the evening.

Tuesday May 31 [1864] Made a forced march to Coal Harbor [Cold Harbor] or near there & had the most terrible fight known. The Col. Kellogg killed & Joseph Payne & we don’t know how many more. 1000 Rebs taken.

Wednesday June 1 [1864] Clear and pleasant. At the front & some fighting with more … not far distant. Lay on the ground near the batteries near Hanover. The troops all move at daylight and some of them before.

Thursday June 2 [1864] Clear and hot. The fight still going on. Lay in the hollow all day and all night where Joseph P. buried. Drew two days rations. Rainy and very uncomfortable. Have not been well for six days.

Friday June 3 [1864] Fighting commenced at daylight and continued all day and till some time after dark, we lay under fire all the time without firing our pieces. Reported 3000 Rebs taken and 16 …. Sent a letter home. Just as I keep wtih reg’t but work out with hard marching without much rest.

Thursday July 21 [1864] Pleasant. Marching back from Snicker’s Gap toward Leeburg & was captured by some of Moseby’s gorillas & marched until late in the night & lay in the field all night & started again on a march of the most terrible roads I ever saw till 8 o’clock at night the next day.

Friday July 22 [1864] Pleasant. Started in the morning and had to march all day and all night on till 12 o’clock at night & then we lay down till daylight.

Saturday July 23 [1864] Pleasant. ___?___ Stransburg. Got there in the evening & stayed in an old building full of dirt. About a hundred & fifty men had drawn no rations since we started but got a little from the Rebs, fresh meat & flour.

Sunday July 24 [1864] Pleasant. Drew rations from the Rebs & stayed in Strandsburg through the day or till towards night & went into camp for the night.

Monday July 25 [1864] Rainy. Moved a little distance to a large old barn & stayed throughout the day. Pretty well only very sore feet & swollen legs. Very short rations. Stayed in the barn through the night. Drew a small ration of bread at night and ate it up.

Tuesday July 26 [1864] Pleasant. Had to march 16 or 18 miles to Winchester where we stayed in by a large church or some old building that looked like it. Very footsore & stiff.

Wednesday July 27 [1864] Pleasant. Moved about a mile and encamped for the day and night. Drew a ration of bread and meat which was good if there had been enough of it.

Thursday July 28 [1864] Clear and pleasant. Still in camp near Winchester. Footsore & unfit to march but have a good appetite if I could get anything to eat. Oh that I were home where there is plenty. I never would go to war again if I could help it. Here I am a prisoner of war.

Friday July 29 [1864] Still a prisoner. The ladies of Winchester bring rations to give the soldiers. They are very kind. Removed about a mile & on the southwest of the village of Winchester towards night close by a mill, a brook all around.

Tuesday August 30 [1864] In the prison hospital yet. My meals are scant & far between & when asleep by night I dream of peace and plenty which I’ve seen of wives(?) & children, parents too, which when I left I bade adieu. I gave my life to Uncle Sam, to save our government from harm.

[Corban was paroled on September 12, 1864. He recuperated at the Annapolis Junction military hospital.]

Letter written by Josiah Corban while recovering in a military hospital after being released from a Confederate prison camp (Courtesy of the Connecticut Historical Society):

Dear Wife & Children
I thought I would write a few lines again this morning & send so you need not be looking in vain for news from me. I can’t tell much but I suppose just seeing a few lines I have written will be better than nothing. The Doctors, one of them, came around yesterday to get the names of the Parole Prisoners; also when & where they were captured, when & where released, so they could make arrangements to pay them all their back pay & also their ration money while they were prisoners. They are going to pay us up pretty soon, & then give us 30 days furlough to go home. That is an order from the war department. & I suppose I can have another furlough if I want it. We all have to wear Hospital shirts. I wear a woolen one under the cotton one that they furnish. They brought in some Drawers but they were so short & small I could not wear them. The most of them were just so, but I shall get along if they will let me wear my own. …My boils have got pretty much done running, but I am so sore yet I can’t sit with much comfort & my Scurvy comes out as bad as ever yet. How long it will continue so, I don’t know, but guess the way I am doctering for it will prove a remedy after a while. I have only just begun on my butter & my Sausage… I shall have to let some one help [me] eat it, I guess, for they don’t allow me to have much meat & I intend to be as careful as possible about eating such things as will hinder me about getting rid of my scurvy. I suppose that will be one thing that will worry you for fear I will be imprudent about eating, but you need not worry for I don’t mean to. I begin to feel as if I could not wait much longer to get a letter from home. Suppose I may have one [waiting] at the Parole camp, hope they will send it here shortly.
Keep up good courage & trust in God for protection & he will sustain you through every trial. Yours the same as ever with much love to all,
Josiah B. Corban