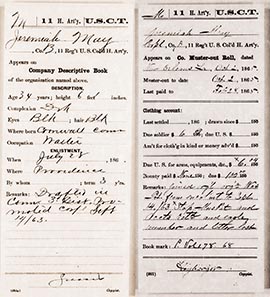 Jeremiah May muster roll pages, 1863 and 1865.
(Courtesy of the National Archives and Fold3.com)

Jeremiah May was born in Washington, New York and moved to Sharon, Connecticut during the 1850s with his mother, Susan, and his brother George. In 1859, Jeremiah married Marietta Weston of Sharon. The couple moved to Cornwall in 1860, where Jeremiah worked as a day laborer. On July 23, 1863, May was drafted, forced to leave his wife and their three young children behind. His military papers listed his occupation at the time as a waiter.

When May was drafted, the military was segregated, and Connecticut did not yet have a black regiment. With no regiment for him to join, Connecticut sent May to Rhode Island, where he was assigned to the 14th Regiment Rhode Island Heavy Artillery. They were stationed primarily in New Orleans. The regiment was designated the Eighth U.S. Heavy Artillery on April 4, 1864 and the Eleventh U.S. Heavy Artillery on May 21, 1864. His first muster was on September 14, at which time he was immediately promoted to Corporal. May served with his regiment until October 2, 1865, when he mustered out at New Orleans.