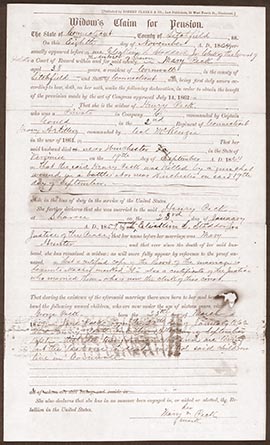 Mary Peck Widow’s Claim for Pension, 1864.
(Courtesy of the National Archives and Fold3.com)

Henry Peck was a Cornwall farmer. He enlisted with Company G of the 19th C.V.I. (later the 2nd Heavy Artillery) on August 4, 1862 and was killed by a shell to the head at Winchester on September 19, 1864.

Peck was survived by his wife, Mary (Hunter) Peck, and two of their children, George and Jane. Mary was illiterate and signed her name with an X on the official pension documents.