Lt. Helen Melissa Clark was one of five American nurses who were the first Allied women to fly into the zone of operations, part of the 811th Medical Air Evacuation Squadron which landed on the Cherbourg peninsula four days after the D-Day invasion began, in June 1944.

Melissa made two more trips to the Normandy battlefront between then and July 1944. During each trip, she was on French soil for about an hour.

During her first air evacuation at Normandy, Melissa assisted with 14 men on stretchers, including six American soldiers, a member of the French underground, and seven Nazis who had been taken prisoners. Shells were bursting near the landing party, and U.S. fighter planes circled overhead to ward off enemy aircraft. 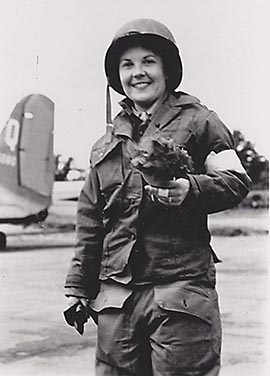 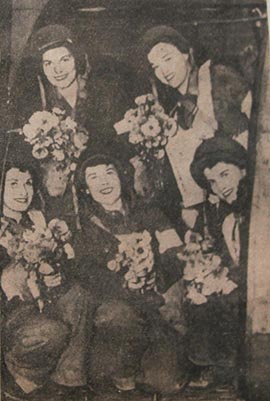 Off in the distance you could hear the guns roar. Just a few hundred yards away our troops were exploding German mines in the fields to get them out of the way. Then we were told there would be a wait until the ambulances brought in the patients.
Overhead the fighter escort circled protectively and they gave us a comfortable feeling. There was nothing we could do for a moment, except wait, so we went picking flowers. The poppies, tall, bright and swaying, were lovely.
But in the fields we came across the bodies of three dead Germans. A group of American soldiers came running up while we were there. They seemed surprised to see us, but asked the same old question—“Where are you from in the states?”
The thing that they seemed to miss most was water.
“Bring us back a couple of bucketsfull the next time,” they joked.
About an hour and a half after we landed the patients were carried aboard. We were busy then.
Among the five in our ship was a civilian Frenchman. We have been told he was of great service to the Army by marking out on the map the places where the Germans had pillboxes. He had a hip injury, but he kept waving his arms, trying to tell us how happy he was. But even the two Germans seemed happy to be safe aboard.
We brought the injured in without accident. We hope we will be going back soon.

~ Excerpt of a letter written by one of Lt. Clark’s fellow nurses, describing their experience at Normandy. The letter was published in a newspaper and saved in a scrapbook kept by Cornwall Town Librarian Emily Marsh.

Originally a teacher like her aunt, Harriet Clark, Melissa earned her nursing degree from the Union Memorial Hospital in Baltimore. She was stationed for eight months at the Army Air base at Alexandria, LA, before graduating from the air evacuation school at Bowman Field, KY.

Melissa visited with her brother, Capt. Ernest D. Smith, Jr., in England before he was killed in action in Germany on November 2, 1944. She later visited his grave at a military cemetery in Belgium.

Melissa’s sister, Sarah Barbara Clark, graduated from King’s Daughter Hospital in Virginia as a nurse cadet in May 1944.