Helen Coley Nauts, originally from Sharon, lived in Cornwall and New York City. After the death of her father, Dr. William B. Coley, Helen discovered his research papers on a non-surgical treatment of cancer. He developed a treatment, today called “Coley’s toxins,” in which live bacteria are injected into patients with malignant tumors, stimulating an immune response which, in many of his patients, completely cured their cancer. His work, while pursued by other doctors, was overshadowed by radiation treatments and was forgotten.

Helen spent more than a decade educating herself in oncology and immunology, ultimately tracking down 896 cases of cancer that had been treated with Coley’s toxins, creating detailed case histories to prove the effectiveness of the treatment. Her work launched a new phase of medical research exploring the connection between the immune system and cancer.

In 1953, Helen founded the nonprofit Cancer Research Institute (CRI) in New York City, becoming its executive director. The Institute is a center for the study of cancer immunology, supporting medical research through grants and fellowships. 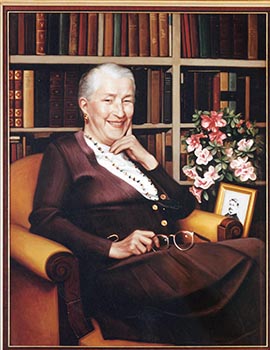 Helen Coley Nauts, portrait by Susan Durkee for the Cancer Research Institute. A picture of her father can be seen on the side table. (Used by permission of the artist)