Harriet “Hattie” J. Pratt grew up on the family farm on Cream Hill. The Pratts were members of the Second Congregational Church in North Cornwall, and religion was an important part of their lives. Hattie’s father was a deacon in the church, and one of her brothers became a minister.

Hattie graduated from Mount Holyoke college in 1876, the eighth Cornwall girl to attend college. She returned home to Cornwall after college, working as a school teacher and developing a reputation as an authority on local birds and plants.

The church was an important part of Hattie’s life. She was a musician for the Second Church for half a century and served as treasurer of the church’s Women’s Missionary Society. During the first decade or so of the twentieth century, Hattie was treasurer for the Second Church, one of only a handful of women in the entire state to hold that position. Her father, Ezra Dwight Pratt, a deacon in the church, had held the same position during the 1880s.

Hattie was one of the first women to run for elected office in Cornwall. Part of the 1895 Prohibition Party ticket, she was defeated by more than 140 votes in her bid to become the School Visitor. (In Connecticut, the School Visitor was required to visit each school twice per term as a supervisor. The position was typically held by men.)

With the exception of her years at college in Massachusetts, Hattie spent her life on the family farm. After the death of her father, Hattie took over the management of the farm, hiring a Polish immigrant to assist with the labor. By 1910, Hattie’s brother Hubert Pratt and his wife had moved in with Hattie, and Hubert took over the farm management.

Despite a lifetime spent in leadership roles normally occupied by men, Hattie was opposed to women’s suffrage. In 1918, she was one of a group of 25 men and women who signed a petition to Senator George P. McLean declaring their “absolute disapproval” of giving women the right to vote. 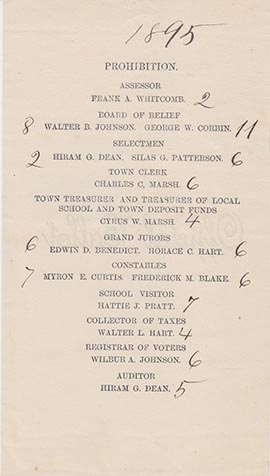