Sarah Northrup and Harriet Gold created national scandals in 1824 and 1826 when they married Cherokee men who had come to Cornwall as students at the Foreign Mission School. Racist mindsets of the era could not tolerate the thought of a respectable white woman marrying a “savage Indian.” Sarah and Harriet stood strong against the public outcry and persuaded their families to support their marital choices. They struggled against racial prejudice for the rest of their lives, with both whites and Cherokees viewing their mixed-race children as something other than themselves.

When Harriet Gold’s engagement to Elias Boudinot became public in 1825, simmering animosity and prejudices exploded. Harriet’s brother burned her in effigy on the Green, and she was forced to hide from an angry crowd. Harriet was able to win her family’s approval, and her marriage to Elias Boudinot took place in the Gold home on March 28, 1826.

Harriet settled happily into her new life in the Cherokee Nation, the wife of a wealthy and powerful man and the mother of six children, but her happiness was short lived. Harriet died in 1836. 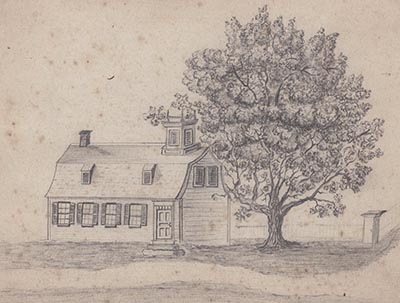 “I now look back to that day with pleasure, & with gratitude. Yes I am thankful. I remember the trials I had to encounter—the thorny path I had to tread, the bitter cup I had to drink—but a consciousness of doing right—a kind affectionate devoted Husband, together with many other blessings, have made amends for all. Truly I have, ere this, entered upon the ‘sober realities of married life’ & if any tears have been shed for me on that account—I can now pronounce them useless tears.”

~ Harriet Gold Boudinot, writing about her wedding in a letter to Hermann and Flora Gold Vaill, March 29, 1832.
Reprinted in Theresa Strouth Gaul, ed., To Marry An Indian: The Marriage of Harriet Gold and Elias Boudinot in Letters, 1823-1839.