Cornwall’s Harriet A. Wilcox Bennett was an ardent suffragist. Her scrapbook of newspaper clippings includes notations indicating which conventions she and her daughter, Ethel Bennett, and her daughter-in-law, Ida M. Bennett, attended.

Harriet was the daughter of Rodney Beckley Wilcox and Rachel Green Wilcox. Her father was involved in the iron industry, and the family lived at various times in Madison, Sharon, Litchfield, and Cornwall. Harriet’s sister, Ann Wilcox, married Naugatuck’s Bronson Beecher Tuttle, a partner in the Tuttle & Whittemore Malleable Iron Company.

During the 1860s, Harriet married Cornwall farmer William C. Bennett. The couple had four children. William died in 1898, after which Harriet seems to have found new interests outside the home. 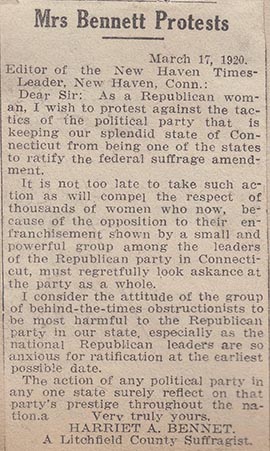 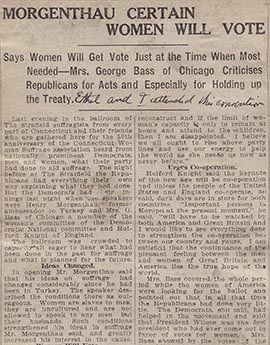 Harriet kept a scrapbook of newspaper clippings, with occasional annotations revealing glimpses of her life. One annotation indicated that she lived in Bermuda sometime between 1908 and 1912. Other annotations indicated her attendance at suffrage conferences, where she was sometimes joined by her daughter Ethel, and her daughter-in-law, Ida Bennett.

Many of the clippings in her scrapbook are articles written by Harriet. One of the earliest clippings is a poem, “Our Guensey,” published in 1898. Harriet’s initials, H.A.B., were the only attribution given to her for the poem.

Newspaper articles written by Harriet Bennett include Cornwall news bulletins, a long article about the opening of the Cornwall Library, obituaries, and an article titled “Joshua Pierce built better than he knew,” which ran in the Waterbury American on January 25, 1910.

Harriet’s scrapbook is a rare source of information about the suffrage movement in Cornwall. Among the articles is one she wrote about a 1913 meeting of the Cornwall Equal Suffrage League, held in her home. Guest speakers included Mrs. Bourne of New Haven and Mrs. Nellie Miner Dowd, daughter of Cornwall farmer Luther Miner and his wife Ellen J. Miner. 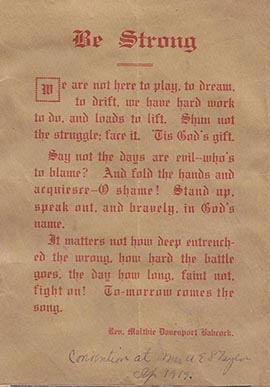