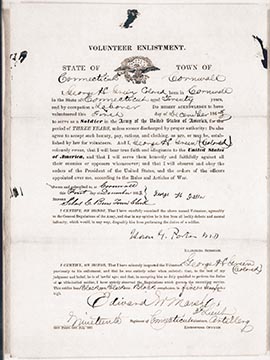 George Henry Green was working as a farm laborer for John P. Stone as early as 1860, when he was only 16. He most likely left school and began working to support himself several years earlier. Henry and his older brother, Andrew, appear to have been orphans. In 1850, the young brothers were living with Huldah Hull, who may have been their grandmother, and Betsey Swift, widow of Jabez Swift. In 1860, they were living with families for whom they worked.

Green enlisted with Company F of the 29th Colored Connecticut Infantry Regiment on December 1, 1863. He died of scurvy in the military hospital at Brownsville, Texas on August 21, 1865.