Emma Monroe was born in Ohio, the daughter of a U.S. Congressman, minister, and abolitionist. The family moved to Rio de Janeiro in 1863, when her father was appointed U.S. Consul there. Emma returned to Ohio for college, graduating from Oberlin in 1869. She married Rev. Charles N. Fitch, also an Oberlin graduate, in 1872. The couple moved to Cornwall in 1873, where Rev. Fitch was appointed minister of the Second Congregational Church in North Cornwall.

Emma Fitch played a significant role in her husband’s pastorate, far beyond the traditional role of minister’s wife: on occasion, Emma filled in for him at the pulpit. At a time when a woman minister was inconceivable, Emma Fitch was able to lead the congregation.

In 1876, only a few years after the Fitches arrived in Cornwall, and perhaps inspired by Emma’s relatively equal footing with her husband, the North Cornwall Church adopted a resolution giving their women members full voting rights within the church. 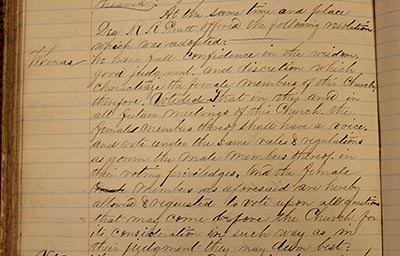 The Fitches were also involved in the construction of a new chapel in West Cornwall, where Emma ran a Sunday School. Reverend Fitch and Deacon Theodore S. Gold travelled to New York City where they met with West Cornwall native, Elizabeth Stoddard Huntington, and her husband, Collis P. Huntington. Fitch and Gold persuaded the Huntingtons to help fund the chapel.