When West Cornwall’s Elizabeth Stoddard married Collis Potter Huntington in 1844, neither she nor her family could possibly have known what lay ahead. At the time, Huntington was an ambitious young peddler, part owner of a general store in Oneonta, New York. Two decades later, he became one of the wealthiest and most powerful men in the United States, one of the “Big Four” railroad magnates, along with Leland Stanford, Mark Hopkins, and Charles Crocker.

From Cornwall and Oneonta, the Huntingtons moved on to California, where Collis profited from the gold rush by selling equipment to the miners. Elizabeth traveled with her husband, assisting him with his venture.

Elizabeth was praised by her husband for her quick intuition and “clear business intellect.” Collis was particularly impressed by her ability to prepare for a six-month journey to the California frontier with only two hours’ notice, and her cheerfulness throughout the long overland journey. 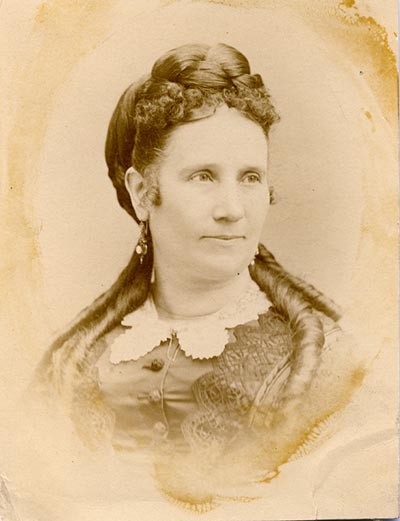 We had a very pleasant sail to Havana except not a little seasick for two or three days. We stopped in Havana three days. I was delighted with Havana. …We took the Steamer Falcon to Chagres which is a little dirty town. We immediately took a boat up the river to Gorgona. We made up our company from the Steamer and we had a fine time. Chagres is a beautiful river and the scenery is delightful. So different from any that I have ever seen before and any picnic excursion up the river. We stopped on the river one night and one in Gorgona. The remainder of our journey was on mules across to Panama.

We were detained in Panama two days for the Steamer. All the Hotels or places they called so were filled with people waiting for the Steamer. It was with difficulty that we could find any accommodations. The natives were very ignorant and filthy and to say the best of it, it is anything but agreeable. We sailed in the Northerner from Panama and made several more very pleasant acquaintances. Stopped in Acapulco one day, went ashore with Capt. Ashley & Lady, and spent the day with the Grovenors family. Passed the day very pleasantly. The manners and customs of the Spanish are very different from our, but we were very pleasantly entertained and had almost everything you could mention in the way of fruit, such as Pineapples, Oranges, Lemons, Limes, Figs, Bananas, Tomatoes and cucumbers were plenty in market. The Melons were superior to any that I ever saw anywhere. We were careful not to indulge too freely in eating them for there were a good many sick on the ship. We had an excellent Physician on board, and there was but one man died and three children out of three hundred and twenty passengers.

We arrived in San Francisco just in time to witness the ruins of that great fire. There were several gentlemen who came on board to meet their wives and families which said that every dollar they was worth had gone with the flames. It was the best and most business part of the City….

We live a little out of the city on Second Street near the river and feel quite safe from the fire. We have a snug little cottage and live very comfortably. Some things are cheaper here than in the States, and some much dearer.

~ Elizabeth Stoddard Huntington, writing to her mother-in-law and sister-in-law from Sacramento, June 24, 1851.
(Excerpts from original letter in the collection of The Huntington Library, San Marino, CA) 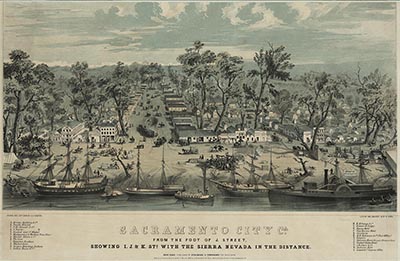 The Huntingtons relocated to Sacramento City, California in 1848, at the height of the gold rush, two years before California became a state.

Collis built his first fortune selling supplies to miners during the Gold Rush. Initial set-backs, including a devastating fire in 1852, did not daunt Elizabeth.

Our recent misfortune blasted many of our fondest hopes. All that our industry & perseverance had accumulated here was destroyed in less [than] one short hour. All that human power could do was done to save our Block but we were surrounded by the Fire before we were aware of it. The wind was blowing a perfect hurricane at the time, the fire and burning boards were flying in every direction.

We all fought the fire as long as there was the least hope. When I with my girl left, her sun bonnet took fire on her head. I was so exhausted that I fell several times. …A Mr. Brigam, who was a very smart young man, was burnt to death on the same block. We supposed he became exhausted and smothered to death. His remains were found the next day among the ruins.

…we had just got the new Store built again and moved into it when the severe rains commenced and the Levee broke away and nearly covered the City with water. It has been over the City about two months. …Business has been very dull and harder times never were known here.

I know that you and many of our other friends, Mother in particular, will say why do they stay in a country where everything is so uncertain. Do you think we could come back to the States as poor as we are now and be contented? no, Phebe, while we have our health and credit left us we will stay and try to get up again. We have succeeded once here and we may again…. No doubt we shall have many disadvantages to contend with, but this is no place to get disheartened in.

~ Elizabeth Stoddard Huntington, writing from Sacramento to her sister-in-law, January 1, 1853.
(Excerpts from original letter in the collection of The Huntington Library, San Marino, CA

Elizabeth was close to her younger siblings and brought them to visit her and travel with her regularly. Although they had grown up on a West Cornwall farm with few prospects beyond farming, the Stoddards became sophisticated travelers, thanks to Elizabeth. She also ensured that they had the best opportunities available. Her sister’s husbands were all given important positions in Huntington’s hardware and railroad businesses, allowing them to build their own fortunes.

Although they have been overlooked by historians, the Stoddard family played vital roles in the building of the Huntington empire, from hosting business meetings in their living rooms to joining the fire brigade when Huntington’s first store in Sacramento burned down. The Huntington empire was a family business, and the Stoddards were connected to nearly every part of the business.

Elizabeth’s older sister, Minerva Stoddard Seaton (1820-1907), spent most of her married life in Hartford, Connecticut. Her son, Horace Seaton, Jr. (1842-1889) moved to California to work at the Huntington & Hopkins store, becoming a partner in 1864. At the time of his death, he lived in Oakland, California, and had built a massive fortune by investing in real estate.

Clara Stoddard Prentice (1824-1912), one of Elizabeth’s younger sisters, moved to Sacramento with her husband, Edwin Prentice, in 1858. The Central Pacific railroad was founded at a meeting in the Prentice home on K Street, with William Stoddard, Collis Huntington, Edwin Prentice, Mark Hopkins, and T.D. Judah present. When Edwin died in 1861, Clara arranged for her youngest child, Clara Elizabeth Prentice (1860-1928), to be adopted by Elizabeth and Collis Huntington.

Hannah Stoddard (1826-1919) moved to San Francisco in 1851 with her husband, Daniel Hammond, who became a partner with Huntington & Hopkins.

William Moses Stoddard (1828-1917), Elizabeth’s younger brother, moved to Sacramento and worked as a hardware merchant. He was a founding member of Collis Huntington’s Central Pacific railroad. In 1886, William established a camp for tourists at Stoddard Canyon in San Bernardino County, California. Stoddard’s Camp was a popular recreation facility for residents of surrounding towns during the early 1900s.

The youngest Stoddard sibling was Mary Jane Stoddard Emmons (1831-1916). Her husband, Delos W. Emmons, was appointed General Superintendant of the Chesapeake and Ohio Railroad by Collis Huntington and created the town of Huntington, West Virginia for the railroad. 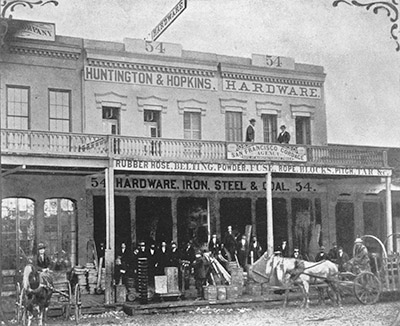 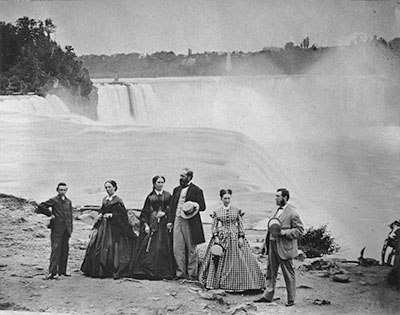 Mrs. Huntington, a native of Cornwall, was a worthy companion and adviser for [Collis]; born in the same conditions, where thrift and industry were the only avenues to success, she braved with him all the perils and privations of a frontier life, with a courage that quailed at no danger, with plans so well laid that they always won success, whether human or material obstacles confronted them.
f.n. – Mrs. Huntington told Mrs. Gold of their journeys by wagon, on horseback or on foot, often in advance of the surveyors, through pathless canyons and mountain declivities, in locating those great railroad lines, which surpass the famed seven wonders of the world.

~ Reminiscences by Hon. Theodore S. Gold, 1901
(Publications of the Connecticut Society of the Order of the Founders and Patriots of America, No. 5)

Although Elizabeth was very much a partner in her husband’s ventures, Collis controlled the finances. He refused to allow her to purchase orchards and vineyards in the San Gabriel Valley in 1877, but agreed to help fund a chapel in Elizabeth’s home town of West Cornwall at about the same time. Elizabeth was also permitted to purchase her elderly father’s farm, allowing him to live comfortably in his final years.

All early Sacramentans will remember this lady as one of the pioneer women of California, and as among the most prominent…. Mrs. Huntington will be remembered in this city, where she was so widely known, and in this State where she had so many friends, as a lady of amiable disposition, strong social characteristics, and as a devoted wife. She was possessed of a strength of character and business judgment that to her husband proved of the greatest service, she being one in all his counsels, and he depending largely upon her in all important movements in his personal business affairs.