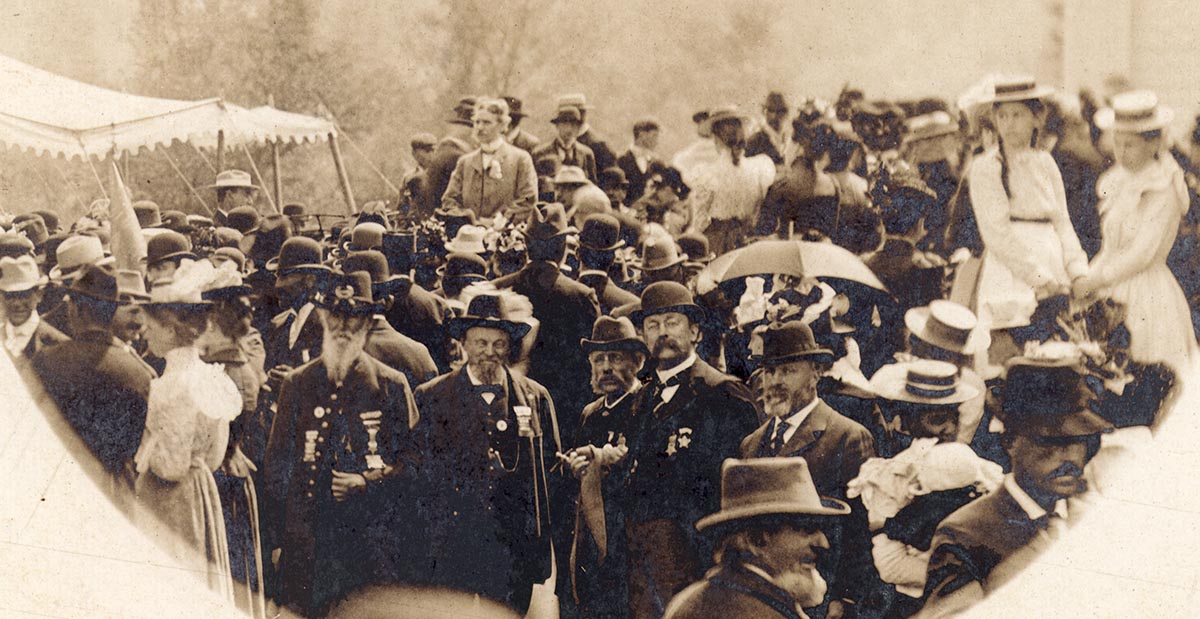 Civil War veterans at the Memorial Day dedication of the Sedgwick Monument at Cornwall Hollow, 1900.
(Collection of Cornwall Historical Society)

The emotional toll of the Civil War was profound. Current research estimates that about 750,000 men (and a few hundred women) from both sides died during the war. More than 130 Civil War monuments were dedicated throughout Connecticut, in addition to countless cemetery obelisks and other markers built to honor individual men who died during the war.

Civil War commemorations have remained an integral part of life since the war ended. They include Decoration Day graveside services, the construction of monuments and grave markers, and major events held on the anniversary of significant dates. Exhibits, lectures, reenactments, books, and documentaries function both as reminders of the Civil War and as a venue for this country’s continuing interest in the Civil War.

The reunion of the Second regiment, heavy artillery Connecticut volunteers was held at Cornwall Bridge, Litchfield county, on Thursday. About 225 of the members were present in addition to a large number of visitors. Dinner was served in a mammoth tent, and the excellence of it was duly attested by all present. Captain Gold made an address of welcome in behalf of the citizens of the place.
After dinner the meeting was organized, and after the election of the following officers for the ensuing year proceeded with the usual routine of business:–President, William B. Ells; vice-president, D.C. Kilbourn; corresponding secretary, Charles H. Pine; treasurer, W.W. Birge; historian T.D. Vaill, with an assistant from each company; executive committee Colonel. J. Skinner, S.A. Granger, F.A. Cook, James Pettitt, S.W. Sage, T.F. Vail and Captain E.W. Marsh were appointed a committee upon the proposed reunion of all the Connecticut regiments. It was voted to hold the next reunion in Winsted. A number of deaths were reported during the past year. Speeches were made by Captain Marsh, Chaplain Phelps, Granger, Kilbourn, Mason, Kelly, Vaill and others.