Betty Woolsey was a member of the first U.S. Women’s Olympic Ski Team and captain of the women’s international team in the 1930s. She occasionally spent free time in the winters skiing in Cornwall Bridge with members of her extended family, the Woolseys and Calhouns. During at least one trip to Cornwall in the late 1930s, she brought along her coach and fellow teammates from the U.S. Women’s ski team.

Betty established herself in the world of competitive skiing at Vermont’s Suicide Six in 1934, and became one of four women on the first U.S. women’s Olympic Alpine ski team in 1936. She was captain of the team, and tied for 14th in downhill. The next two winter Olympics, scheduled for 1940 and 1944, were never held.

Skiing was not Betty’s only sport: she also competed at squash and challenged herself with mountain climbing. With Europe inaccessible during World War II, Betty and other skiers found new slopes at Sun Valley and Jackson Hole. Betty fell in love with Wyoming and purchased a ranch near Jackson Hole in 1943. 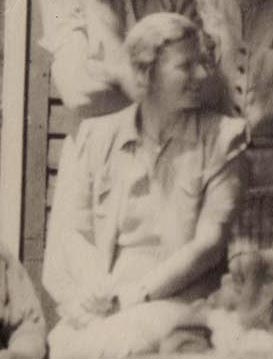 Betty Woolsey at a family gathering in Cornwall, 1939.
(Private Collection)