Women’s efforts to engage in athletics during the late 19th century were hampered by a belief that vigorous exercise was dangerous for women. Even as recently as the 1970s, women athletes have struggled to prove their physical prowess to people who insisted that women were the “weaker sex.”

For most of the 20th century, athletes at women’s colleges and private high schools competed in intramural sports. It was not until the 1960s that teams from different schools began competing against one another.

Title IX was enacted in 1972, prohibiting sex discrimination in any education program or activity receiving federal funding. Despite numerous legal challenges, including one from the NCAA, Title IX has helped make sports more accessible to female students. 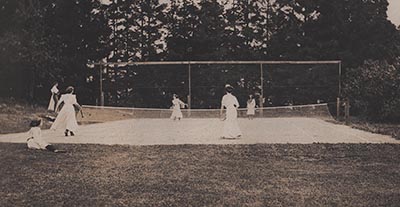 Tennis in Cornwall, circa 1900.
(Collection of Cornwall Historical Society)